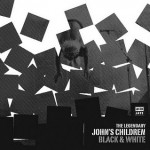 Not sure what to say about this one. It’s called Black and White, and it is. The cover is a Radio Stars pic, and there’s a Blue Meanies tune (‘I Got The Buzz’) on there, as well as a bunch of JC tunes. Now if that’s not multi-textual, I don’t know what is.

John’s Children injected a welcome dose of controversy and even sleaze into 1967’s summer of love, posing naked for photos (save some strategically-placed flowers), inciting riots at gigs with staged fights (complete with blood capsules) and getting their Desdemona single banned for the line, “Lift up your skirt and fly.” They’re also known for one of the era’s most sought-after collectables in Midsummer Night’s Scene and counting pre- Tyrannosaurus Rex Marc Bolan in their line-up, who recalled beating the stage with a chain but fleeing for calmer waters after four months.
Inevitably, the group burnt out, leaving singer Andy Ellison forming Jet and Radio Stars in the 70s, while the infamous John’s Children legend swelled. The group reactivated in the late 90s with Ellison and original drummer Chris Townson (who sadly succumbed to cancer in 2008), joined by Jet/Radio Stars bassist Martin Gordon and former Polecat-then-Morrissey guitarist Boz Boorer, recording this long-lost collection of revamped JC songs (Sara Crazy Child), covers (Eleanor Rigby, Lazy Sunday, Love Is All Around) and stridently-chorded originals, ranging from the old-style unhinged (check the mighty Townson’s Moon-challenging eruptions on Train In My Head) to questionable (Oh No (She Wouldn’t Swallow)). A genuine post-psych curio.  Kris Needs

John’s Children were, of course, one of the seminal mod bands of the 1960s, bringing anarchy to Europe on their riotous tours with The Who, leading to a shell-shocked young Marc Bolan leaving the band to pursue a less dangerous music career. A chaotic debut album, released in 1966, was the fruit of this white outfitted, Hells Angel protected, Simon Napier Bell managed alliance.

After the break-up of John’s Children, Andy Ellison and drummer Chris Townson, formed Jet, which later mutated into Radio Stars, all throughout maintaining a well-dressed and well deserved reputation for on-stage mayhem and full-on rock debauchery. And then they rested.
This new album, Black And White, and the second incarnation of John’s Children, has it’s genesis in the corner shop. Andy Ellison had just popped out to get a news paper and Pot Noodle when someone shouted: ‘Hey Andy, you were in my favourite band.’ A few beers later, after discovering that Andy’s newly made friend Boz Boorer played with Morrissey and the Polecats, Andy took up Boz’s suggestion that maybe they should give a resurrection of John’s Children a try.

Andy hadn’t played the John’s Children material since 1967, and while the live shows for the reformed band went well, work commitments meant that it took a good few years before the new album was finished. With Boz on guitar and Chris back on drums, Martin, the bass player from Jet and Radio Stars, was recruited to add bass. The finished product is a mix of new material, including Train In My Head from Sugarlumps 3. Plus recordings of old tunes, some of which were penned by Marc Bolan, Sara Crazy Child, others of a more ‘trad’ nature, Lazy Sunday and Eleanor Rigby. Stand out track I Got The Buzz (those paying attention may note that this is in fact our old friend the Blue Meanies tune) is a garage punk fuzz fest that harks back to the 60’s line-up at their peak.

The album is dedicated to the memory of Chris Townson who sadly died in Feb 2008. File under ‘interesting’ rather than ‘essential’ but definitely worth a listen. Released through Acid Jazz Records on June 6th 2011.
.