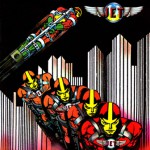 And now, the legendary Jet album, entitled in a fit of corporate desperation ‘Jet’, is finally made available to a new generation, despite skipping four of them. For those who still survive, Sony Records now officially release the digital version of the Jet album (November 2020). It will be available via the usual outlets (Spotify, Apple Music, iTunes, Amazon Music, Deezer and more). The words (and more) are available in the lyrics book ‘Words In Your Shell-Like‘.

Whyfore Jet? Where did these musicians spring from? Bassist/songwriter Martin Gordon was in Sparks at the time of their album ‘Kimono My House’. He then teamed up with drummer Chris Townson, once of John’s Children and briefly with the Who. John’s Children had Marc Bolan on guitar and Andy Ellison on vocals. Chris dragged Andy along to Jet rehearsals one day, wearing a green anorak. Jet needed a singer with a green anorak, so Andy was, in many ways, the perfect choice. Guitarist David O’List stepped up under the nom de plectrum of Vince Vermilingua. Vince had once been in The Nice and Roxy Music, and had briefly depped for legendary acid-casualty Syd Barrett in Pink Floyd. Frankly, he got around a bit, did Vince. Finally, and appropriately, but accidentally, on keyboards was Oxendale.

Thanks to the foresight of Jamie Turner, who became Jet’s personal manager, the band were snapped up (but not literally) in 1974 by one-time Beatles string arranger (‘She’s Leaving Home’) turned businessman Mike Leander. His voracious company snapped up (literally, this time) all management, publishing and recording rights. Mike Leander also asked for a controlling share in the band’s mothers, their mother’s mothers and any friend of their mothers who happened to be passing at the time of the band’s signing away of all their rights, or indeed at any other earlier and/or later time.

In 1975, Jet recorded their debut, and simultaneously their farewell, album for CBS. This extraordinarily prescient plan saved them a tremendous amount of subsequent studio and touring costs. The album was recorded in London’s East End at Trevor Horn’s SARM Studios. It was produced by Roy Thomas Baker (Queen, Foreigner) and engineered by Gary Lyons (later to produce the Rolling Stones) and Gary Langan (subsequently co-founder of The Art of Noise).

The album itself, as far as the band were concerned, was to be called ‘Has Anyone Seen Charlotte?” A corresponding album design was worked up by Hipgnosis, and a photoshoot was carried out at Mick Jagger’s house Stargroves. It featured the Rolling Stones’ mobile studio in the background, in fact a Winnebago caravan formerly owned by Ronnie Lane and now parked round the back. As attractive as the initial artwork results were, they were roundly rejected by CBS, who made a counter proposal. The album should be called ‘Jet’, they said (it was), and the design should feature a design (nicked from a Jack Kirby ‘Mr Miracle’ comic cover) by Roslav Szaybo (it also was). Plagiarism lawsuits followed, but we digress.

Following the release of the album, Jet went on tour with Hunter-Ronson. Ian Hunter was now emerging from the mad shadows of Mott the Hoople, and Mick Ronson was making his own mark following his debut as David Bowie’s musical factotum. The tour saw Jet being told off for stealing the headliner’s stagecraft, but all ended peacefully and Jet began their own headlining UK tour. This tour saw, among other things, members of the band tying themselves up on stage and falling immobile to the floor (at Newcastle’s Mayfair Ballroom) and performing to audiences consisting of two people (in Dunoon).

Following the tour, Jet were ‘sent to the countryside’ to begin work on a second album. In response to the visit of head honchos from the record company, Jet sensibly disbanded, only to shortly regroup as Radio Stars. But that’s another story. Which, entirely coincidentally, can be found here.

Later in the century Jet was hailed as the ‘first supergroup of glam’, but the band members were regrettably unaware of this fact at the time, otherwise they would have been more careful.