It is 1973. Bronzed Californian showbiz twins troll over to the UK, replace their existing Sparks band members with Brits and make an album. They get some hits and cunningly replace most of the new British band with more accommodating mole-lovers. When it all stops, they go back down the trans-Atlantic burrow. 45-odd years later, it all comes around again.

So there we are. Still want more essential mole-facts? 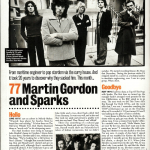