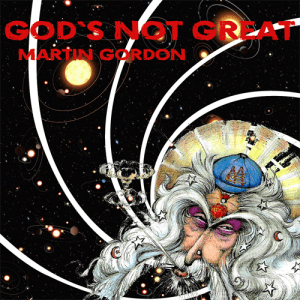 Donning his metaphorical Wellington boots once more, former Sparks, Jet and Radio Stars bassist Martin Gordon continues to plough his own furrow through the treacherous and mine-strewn field of agit-pop with his new album ‘Thanks For All the Fish’, released on March 1st 2018.

Ahead of the album comes the single ‘God’s Not Great’. Set for release on Feb 1st 2018, we find the Deity puffing imperially on a suspicious-looking cheroot as the song reflects upon His so-called ‘greatness’. The Greek chorus (it’s OK, they are not really Greek but Macedonian) decides they are not convinced. It all comes to an inevitable and only too-predictable conclusion, but not before Gordon’s iconic Rickenbacker bass delivers a brief, but divine, solo. God was created by Chris Townson, rather than the other way round.

Martin Gordon’s career is studded with such illustrious names as the Rolling Stones, Primal Scream, Kylie Minogue, Blur, Boy George and the Tiger Lillies. He was performer/arranger on Sparks’ legendary breakthrough album ‘Kimono My House’, being somewhat imaginatively described as ‘the architect of the Sparks sound’. Since his solo career began, Gordon has not looked back, although he will not say why.

Goldmine magazine holds the view that “in a 21st century littered with dour sourpuss and earnest confessional, Martin Gordon stands alone as a beacon of comic genius, melodic incisiveness and lyrical intelligence. He is truly the last great British songwriter left standing”. Get that man a saline drip, quick.

Ascend the cosmic escalator with us! Berlin-based graphic artist Yaneev Topyol created a retina-searing God-video to accompanying the single. Those who suffer from epilepsy, and miners, are advised to stick their heads into a bucket of sand while viewing.

NOW LOOK HERE! Because here are all the words to all the Gordon tunes – everything, from Jet to Mammals and further! In a book! Like what you have to read and like that.

2 thoughts on “God’s Not Great”