Proudly Taking Back Control of Our Bananas!

Martin Gordon releases ‘Idiots’ – a hymn to Brexit, a manly and not-at-all-foreign celebration of the glorious and imminent restoration of British control over the curvature of our proudly-British bananas.

‘Idiots’ is an ode of praise to those brave men (and woman) who have selflessly abandoned all vestiges of common sense in order to carry out the express wishes of proudly-British idiots who courageously determined that Belgians were attempting to impose phlegm-quotas by the back door. Take that, Walloons!

In June, British idiots (and any others who happen to be knocking around the place) will have their last chance to join Trump in the rubbish bin of history or to regain control over their shining future as an imperial power by electing a pre-programmed Dalek incapable of social intercourse.

Did you know? A lyric video was released, featuring the re-recorded version of the tune, as released on Thanks For All the Fish:

Can you read? Oh, good! Here are the idiotic lyrics, and you are just the kind of person we will need when we invade Spain. But don’t bring that embarrassing pink passport, whatever you do.

from all regular (but foreign) outlets. Anyway my dad’s a policeman. And I bet he’s bigger than your dad. Yes but no I bet he is.

Idiots is already attracting abuse and physically-impossible exhortations from the simple-minded, geriatric and former bass-mimers; add your own idiotic contribution below!

and  more musing on the subject from Deutsche Welle:

and the Irish Times: 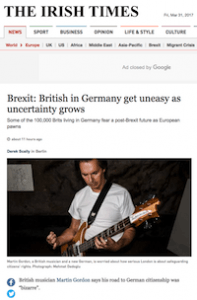