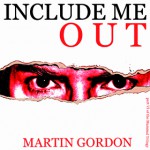 And so, for the last time, here comes another installment of the Mammal Trilogy. Since the release of his ‘Time Gentlemen Please’ album in 2009, Gordon has lain low, observing proceedings with a jaundiced eye. Finally spurred into action by a combination of penury, misanthropy and an increasing hatred of ant-eaters (we do not include the entire species of the suborder Vermilingua, but specifically the genus Vermilingua peronatus singularis), he was driven to create ‘Include Me Out’ as the sixth part of the Mammal Trilogy.

Gordon infers that ‘Include Me Out’ is the final chapter in the series; when quizzed however, all he will say upon the subject is “Let us have no more foolish talk talk of mammals and trilogies!”

A brief look under the cover of ‘Include Me Out’ indicates that the album’s twelve songs (which include a cover of an obscure McCartney tune) focus upon topics of contemporary significance. They acknowledge the imminent demise of the human race despite the increasingly popular use of recycled toilet paper, they address xenophobia by quoting an American politician who noted that “if English was good enough for Jesus, it’s good enough for me”. They tell the touching story of Stanley Green, an English eccentric from the 70s and 80s now declared to be the first ‘human billboard’, and they observe the Arab Spring and the temporary dearth of despots.

The songs document lunar and loony conspiracy theories and those who hold them. They empathise with transgendered forest-dwellers, in the tragic form of a man who lives only to wear stiletto heels, and the title song rails against everything that’s left over, including celebrity dwarves on the telly. The album ranges stylistically from tear-jerkingly dramatic orchestral ballads to whimsical, ukulele-based social commentary. What it is not is a collection of sensitive, heart-rending fly-on-the-wall odes to lost love, waterfalls and that sort of utter tosh. If Gordon wants poetry, he declares, he will ask a poet. Reviews – you are not alone.

Talking of transgenders forest-dwellers, check this out, from the UK Guardian. In a weird example of art reflecting life, the protagonist quotes ‘Call Me Anne’ as he reflects on his daily life as a Russian high-heel-wearing truck driver. Not another one, I hear you wearily cry…

Obtain this exclusive audio product via Radiant Future or via Amazon

Words in Your Shell-Like – all the lyrics to all the tunes.

Find these items in the Radiant Future store.