Yenyen: So, the story of the Radio Stars started in 1975, with Jet, and with your encounter with Andy. How did you get to know each other? 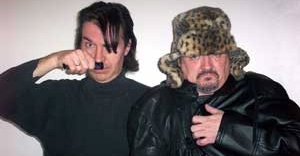 Well, drummer Chris Townson was out of a gig with Jook and I was out of a gig with Sparks, when the two bands joined forces in an unsuccessful attempt effort to develop a sort of glam-thug synthesis. Chris had a singing friend, he told me, and brought him along one day, wearing a green anorak. And so Andy did, so he did, to be sure.

Yenyen: Compared to Jet, Radio Stars’ music is heavier, was it a wish to make a break with your previous band?

Well, everything changes, you know. Jet was rather twinkly, Radio Stars less so. We didn’t have those cheeseboards, that was one reason. Plus the times they were a-changing, as well.

Yenyen: The Radio Stars appeared in England right during the punk area, were you coming closer to that type of music at that time?

We did what we did, and what we did was get signed to a punk label. Some saw this as significant. Actually what the recordings that the label signed were by Jet anyway, so what did that mean? Not much, to be frank. You are what you is. Or perhaps more accurately, you are what people thinks you is, and this was, at one point, punk, and at various other points other things.

Yenyen: After two albums you decided to leave the band, what was crossing your mind in the end of the seventies decade?

This is incorrect. The band left me, and enrolled another bass player. Alas, it had not been thought through with sufficient (or probably any) rigour. As for me, I thought – enough already! and went to Paris to produce bands and hang out with the Rolling Stones.

What was in my mind at the end of the Seventies? How could I have a good time all the time, more or less.

Yenyen: Then you came to work in studio as a producer with many artists, was it a way for you to stand back from your career? From the “rock world” in general?

No, it was a way to stop starving to death, which didn’t seem like a good career move at the time. All my ‘career moves’ have been based upon a similar strategy, and clearly they have been successful, in that I am to all intents and purposes still alive. Standing back from the rock world came only in the 90s, when I went to university and studied some ologies. That was an eye-opener, and no mistake. The farther one can stand back from the rock world the better, in my opinion.

Yenyen: Your career has met a lot of bouncings with record labels, a “cameo appearance” with the Rolling Stones, or even a collaboration with Sparks which ended up quite…tragically. In retrospect do you still have bitterness or did it help you to go ahead?

Bouncing record labels? Most of them were run by nitwits, no problem there. Chiswick, on the other hand, were marvellous. Cameo with the Stones? Who was I to turn down the offer of a red rubber cod-piece? Collaboration with Sparks? What, in the sense of traitorously informing upon colleagues? I was found not guilty when the Wall come down, yer Honour.

Oh yes, I love the tales of my ‘bitterness’, especially from those who have never met me, and who neither know me or have any kind of insight into the machinations of the music business in general or of the Maels in particular, but who rely upon their rose-tinted fan-spectacles to support their improbable propositions of ‘genius’ (Mole) and ‘bitterness’ (me). Sorry about the length of that sentence. Their egregious bad grammar and spelling also indicate that these people are probably not to be taken too seriously.

But to take your own question seriously, given that it is properly spelt and punctuated, I will address the issue. Following the end of my tenure in the band Sparks, one or more people came up with the following notion: ‘(1) He doesn’t know very much about the music business. (2) We can misrepresent the facts to him, hoping that he is sufficiently unaware of the reality to discover it and then (3) we can pocket all of his share of the artist royalties from this currently big-selling album’. The person who delivered the misleading statement to me was Sparks manager John Hewlett. The instrument was a letter between me and Island Records agreeing to relinquish my claim to all artist royalties in perpetuity. The co-signatory was David Betteridge but also possibly in the frame, in terms of responsibility for the fraud, are: Ron Mael, Russel Mael and Tim Clarke. I still would like to know who it was who cooked up the shabby scheme.

As I now have a small son who will inherit my copyrights, I am documenting various things for his future perusal.

Yenyen: You reappeared in the 2000’s releasing albums with your own name on the cover, where we discovered all your composing skills. Was it an old dream? What has been the stimuli that made you realize it?

You discovered my composing skills in the 00s? Clearly you had not been reading the composition credits of any album that I made from 1975 onwards. The stimuli was raw fish, I had been eating a lot of it at the end of the 90s, and presumably it took it’s time to work it’s way through the digestive system. Well, that’s fish for you, I suppose.

Yenyen: Since 2003 you work on what is known as the Mammal Trilogy which fifth album has just been released. Can you tell us more about this “Mammal concept” of yours ?

Yes, the mammal is very big in this household, and so I thought I would devote a work, or five, to celebrating their warm blood, their usually-viviparous nature and their plumage. And their essential stupidity. But not fish, of course, we don’t like fish, too clever by half. Or Moles.

Yenyen: Well, as many musicians, you must have quite a lot of inspiration sources and influences, who are your idols? Your cult albums?

A multitude. Ken Elliot and Seventh Wave – marvellous, both in terms of composition and production (the magical Neil Richmond was responsible). The Trio of Doom – magical playing from all concerned, despite it’s short existence as a functioning combo. Almost anything by Todd Rundgren, whether early or late. Even his circumlocutions on the topic of rap are acceptable in this household. Mahavishnu Orchestra goes without saying, naturally. Guitarist Sonny Sharrock and Jeff Beck are in there as well, and of course anything at all by Frank Zappa, who covered all the bases – composer, musician, conceptualist. Your countryman Jean-Luc Ponty is something of a mean fiddler, and he’s there as well, at present. I’m also currently doing the watusi to ‘Experiments with Pops’ by the Gordon Beck Quartet.

Yenyen: After a concert in London in 2008, you are going to go back on stage in a few days with the Radio Stars. How did your meeting go? Do you still have as much pleasure to play altogether as in the good old times?

It was fine, and fun was had. But to which good old times do you refer, by the way? I would be interested to discover them, post facto.

Yenyen: Do you have any other projects with the Radio Stars? Are you planning a tour? An album?

The Great Ford will, I trust, deliver me from this act of karmic retribution.