*Let’s look back through the years for a while: I would like you to recall your experience with the Mael Brothers, playing in Sparks. Your inclusion in the band for “Kimono My House” was very fortunate, as this album was the first real success for Sparks… How do you remember those days and the creation of those songs? (Favorite song?) 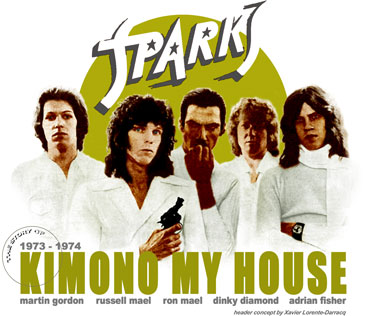 I remember it well. Rehearsing first of all in a dance studio in Clapham, and then in a smelly dungeon in Chelsea, transitioning into a studio, people responding to the tunes as they came out of the rehearsal room, recording the album in Island Basing Street and then moving to the Who’s studio in Battersea. Paul Kossoff dropped in to the Island session (“…terrible hair…”), and Roger Daltrey appeared at Ramport, but left again. My favourite tune to play was called ‘Hasta Manana’, my least favorite something called ‘Equator’, which went on and on and on, and was a slow 6:8 to boot, which made it even more challenging.

*Pls describe/define/snapshot the Mael Brothers. Were they difficult and/or weird guys?

The other one – Rog, I supposed – once asked me if I wanted to get my hair cut and I said no, I didn’t. Apart from that, nothing really sticks in my mind… But they were generally a happy-go-lucky wise-cracking pair who liked nothing so much as a good belly laugh, a few pints of Directors real ale, a couple of steak and kidney pies each and then getting their tits out for the lads. Then they would talk about football the whole evening. One of them, I forget which, was a big fan of Steeple Bumstead. Or is that a west Indian cricketer? Or a nice village in Somerset which won the Nicest Village in Somerset award last year? Well, anyway, those were the days.

*What was the real reason you were invited to leave the band? I guess you haven’t met them recently just to cure old wounds…

All I can do is quote their manager of the time, who noted that I ‘made them nervous’, presumably in terms of their domination of the proceedings. I mean I didn’t go around flexing my enormous six-pack in their direction or threaten to shag their mothers or anything. There was quite some conflict about my sound which I developed with my instrument of choice, the Rickenbacker 4001. I was more than happy with the sound, and in fact had worked long and hard in the face of engineers who were less than concerned with how the bass sounded, but those twins decided that they wanted someone who was more biddable. I confess I did read a newspaper (whilst playing) at one of our rehearsals – I assume that this did not make a terribly good impression. However, making a terribly good impression was not uppermost on my mind at that point.

So I was offed, and of course this they were entirely entitled to do, it being their band and all. However what they were NOT at all entitled to do was to encourage me to sign away all my artist royalties from the ‘Kimono My House’ album, enriching band and management by 20%. The deliberate misinformation which I was given by manager John Hewlett led to my signing away all artist royalties from the album in perpetuity. This shabby behaviour was compounded by the fact that shortly after I was removed from the band, the then-members were presented with a gold album each for the sales of KMH. Hewlett says today “I can’t remember what happened to your gold album, it might be in my garage…”. Others have “no recollection” of taking possession of it at all. Ho hum, it’s a funny old world and no mistake.

In 1994, Sparks were appearing in London, and I, somehow, received an invite. I had last seen Reg in 1977, in the Roebuck in Kings Road. For some reason, I presented him with the first Radio Stars album. I hadn’t seen Rog for a coon’s age, so I was looking forward to this opportunity to discuss outstanding issues with both of them upon an adult basis, for the first time. But it was not to be. We met after the gig, and sat down together. I said that there were some issues which I would like to discuss, whereupon they immediately stood up and said that they had to go back to their hotel at that very moment. i was rather peeved by this.

In the morning, I called Mojo magazine, and proposed a review of the previous evening’s concert. The irresistible hook was that it was to be written by a (disgruntled) former member. I strove for objectivity – well, somewhat – and admitted my compromised position, but I did take pleasure in taking my feeble revenge. Plus I got paid for it.

*What’s your opinion about their career and evolution? Maybe you haven’t listened to them after the 70s… but I’m really curious, and the Brothers seem to be as eclectic and restless in music as you are.

I heard that they moved into disco, very nice if you like that kind if thing. I’m a bit allergic to squirrels, so I tend to give their stuff a bit of a wide berth, but I am sure that you could probably dance to it, should you feel so inclined. And that, let’s face it, is what art is all about.

*After Sparks came Jet, more glam than arty… and a real underrated band!! Pls give me your thoughts about it. (Fav song, pls?)

Well, Jet began as a bass and drums duo. Then we felt compelled to expand, literally, into a more traditional direction. I wrote some songs, we played them, that sort of approach. As it all came together, we got a management company interested and the ball began to roll. We sign to CBS, Roy Thomas Baker produces our album, we go on tour with Ian Hunter and Mick Ronson – where could we possibly go wrong? Dressing up as bizarre creatures from an Australian hairdresser’s nightmare and employing musicians who were half bonkers, that’s where. Plus spending all our money on hairdressers. And antagonizing everybody, including the management and the record company. Four reasons, if not five. Favourite Jet song? Probably ‘Whangdepootenawah’. In fact I recently rerecorded some Jet tunes, for a project which is on the back burner. I recast one of them as a slow waltz… but more of this (possibly) in due course.

*Then came Radio Stars, more punk than glam, but still amazing (and really underrated as well). Same question here: how do you recall those years?

Well, Radio Stars was still Jet, really, except that we changed our trouser concept and began to play a bit faster. The media thought we were a punk band, the public believed them and we didn’t tell them otherwise. So we kept getting faster, the jodhpurs were replaced by tight leather trews and the rest was history. Most of it was enjoyable, some of it was not. The demise was regrettable.

*Just before you started your solo career, you also flirted with pop (Blue Meanies) and produced some artists (from Kylie to Blur)… Which has been the most grateful/enjoyable artist you’ve produced and why?

Grateful? None of them, they are all bastards, miserable, ungrateful bastards! Most enjoyable, artistically speaking was the Tiger Lillies, with whom I did one album. I roped in a bunch of Turks to decorate it musically, which they did admirably. Blur was quite fun. I was cast as live keyboard player. I wasn’t playing the whole set, so I went offstage, left the building and went to the adjoining pub in Kentish Town. I sat next to the side wall, so that I could hear where they had got up to, and rejoined them after a couple of drinks. It all worked out very nicely, until the bassist realized that I had played bass on Kimono My House and became all odd. “Why didn’t you tell me?!?” he demanded. I recall one Kylie event, performing in some enormodome in London’s docklands where she was, to my great enjoyment, crawling around a lot on top of my grand piano but otherwise nothing really stands out, so to speak.

*Well… you’ve done everything, you’ve been everywhere and you’ve also created a six-part-trilogy… What’s left to do for Martin Gordon?

I think my Mammal days are finally behind me. I’m doing a spot of gamelan again… we will see what, if anything, the future holds. Which brings me to the point: what was that Trilogy all about? The moment has finally come. Well, the point was that… oh, I see you have another question, I’ll hang on a bit…

*Also, to make total balance: what do you think it has been your highlight ever? And which would be the lowest point?

Highpoint: finally getting a five-string bass, after observing from afar for many years without having the courage to take the plunge. And returning to the double bass after many years. Two high-points. And a third, if I may be permitted, was finally making my debut solo performance (in Boston in 2007), after all these years. On the board outside, which had my name scrawled on it, someone had climbed up and added three exclamation marks. I was rather touched by that. Plus I wasn’t even wearing shorts, unlike all my fellow musicians. Lowpoint – not being invited to join the Rolling Stones, the ungrateful bastards. After all I did for them. I mean, where would I be today without them? That’s what I want to know.

*Thanks so much for your music and attention. Is there any special thing you would like to say to our readers?

Yes, I would very much like to explain the Mammal Trilogy to them. I have been trying to do just that for most of this interview, but you keep butting in. The entire point of the Mammal Trilogy is that… oh, wait, there’s someone at the door, I’ll be right back…