The story continues. Jet tour but go rapidly into a tailspin

Phil King poses a Q: What about the Jet stage gear?

Chris Townson: It was all designed by the guy who did the Jook gear for the Sweet tour that never happened – and also for Elton John. I was very wary, so just had something simple. Davey had this great big spiky outfit, Martin had his jodhpurs with MG embroidered on them – and Andy had these white pyjamas made.

Andy Ellison: I had a fantastic kaftan made with Jet on the back. And some fantastic boots made by Andy from Shepherds Bush, who also made them for The Glitter Band and just everybody else in London at that time.

Q: How was it in the studio with Jet?

CT: The studio with Jet was an absolute nightmare till the basic takes had been done. Then you’d have a few brandies and it was quite funny. Your responsibility was finished and you could enjoy the discomfort of other people. Then I’d come in the next day and listen to it and think, “That’s dreadful. Really boring.”

AE: He was very good. He was also working with Queen at the time. We were in Sarm 2, where we spent about a month working at night. CBS had decided that Roy Thomas Baker was the one to make us sound like some form of English Sparks.

CT: He was very camp, but very funny. He used to call everybody “Darling” and “my dears.” The sounds he used to get were great, but he was told from up high it had to sound a certain way and mixed it differently. Which is when we started to get disillusioned with CBS and become cynical and almost taking the piss. Which is not a good idea to do to the people who were paying you your money. We started to write stuff like ‘Tax Loss’ and ‘Our Boys.’ Silly songs that went on for hours and hours. They were getting very frustrated because they wanted more commercial stuff.

CT: Well I broke my leg playing football against Pink Floyd, so I didn’t go on the tour. We first started playing football against them at a rehearsal rooms in Fulham. It got quite nasty and we started having arguments. So I said to Roger Waters, “You bring your team and I’ll bring mine and we’ll give you a proper football game.” So he came to north London. I met them in Arnos Grove and got a pitch together and a team I played for and we played them on Sunday morning. And that’s when I broke my leg.

Q: So that was when you were meant to start the Hunter-Ronson tour? 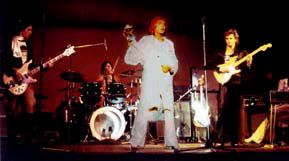 AE: We’d been doing some demos over in Hendon in Annie Lennox and Dave Stewart’s studio. At the time they had a guy drumming for them called Jim Toomey, who we got to cover for Chris. We played in Glasgow at The Apollo. I remember it had this huge stage. It was at least 12 or 15 feet above the ground. We did the soundcheck and in front of the stage there was a small gantry that would take the gear up to the top of the stage and back down again. I thought this would be a great place to jump onto later.

When the gig started we were playing for two or three minutes and I jumped out onto this thing, but it wasn’t there any more. They had dropped it down in to the depths somewhere. So I disappeared 15 feet into this passageway that was obviously an orchestra pit, and ran off to the left through a door and was lost. As I went away I could gradually hear the sound of the band getting quieter and quieter. I went down various corridors, opening doors and thinking “I’ve got to get back to the stage.” Eventually I found this door with bars and bashed them open – and suddenly I was out in the street! The door slammed behind me and I was in an alleyway with just a couple of drunks for company.

Q: And after the tour CBS sent you away to write some new songs…

CT: This is when CBS had got rather fed up with our cynical ways. Playing ‘Springtime For Hitler ‘and a song Martin wrote about every CBS band called ‘Everybody Loves A Sailor’. We were hauled up on the carpet in the headmaster’s office again and told we had one final opportunity to come up with some commercial songs. So we spent a week writing a whole new set and linking every number so there was no stop. We even then started rehearsing it backwards. They were always complaining that wasn’t enough light and shade, so we put a lampshade on the piano and Andy would switch it on and off during the set. When Andy was asked by the label and management who came down what he was doing, he said, “ That was our light and shade.” You can imagine. It was like the mafia turning up with all these black cars. Mike Leander’s mob and his lawyer, his accountant, people from CBS and Nicky Graham from CBS. We played them this huge edifice that we’d put together – with the lampshade. ‘Springtime For Hitler’. Absolutely taking the piss. Needless to say we lost the contract, but it was very funny.

AE: Your drums disappeared again. Obviously taken back by CBS.

CT: They were stored at Steve Marriot’s house. We went there one night and got them – but then RAM took them again and wouldn’t give them back. I actually went in on my own. They asked “Are you playing with Martin?” I said that I might do. He said, “There’s no way I’m going to do anything to help that guy.” They had a real downer against Martin. I felt like saying, “I probably won’t actually. Can I have my drums please?” But I stuck to my principles. And that’s when I started thinking, “I’ve had enough of all this. It’s all too much bullshit and nonsense.” Sadly that kind of feeling overtook the fact there was some really good stuff going that came out later in Radio Stars.

Q: You played drums on ‘Dirty Pictures ‘which came out as Radio Star’s first single.

CT: Yes, that was still Jet at that time. I was playing Dinky Diamond’s (Spark’s drummer) kit.

AE: We did ‘Antler, Have You Seen Charlotte’? which was ‘Don’t Cry Joe’. Great numbers actually

AE: There came a point where Davey O’List was not cutting it. CBS definitely wanted to keep him in the band, but we didn’t. So secretly we did an audition for a new guitarist. We put an ad in Melody Maker. ‘New guitarist needed for name band with deal.’ We had the most amazing people coming in. Absolutely weirdoes. We would do this short number which everybody had to play along to. By the end of the day we were getting really bored.

CT: So Martin ended up playing drums, someone else played bass – and I went out and joined the queue.

AE: But in between we had some guy come in who wanted his girlfriend to do a dance while he was playing. Another guy brought in a guitar which still had the price tag hanging off of it. He’d just bought it that day and had never played guitar before in his life.

CT: So he plugged it in and almost had a heart attack!

AE: Near the beginning there was a guy called Ian McLeod who we noted down – who was brilliant. This is the guy we phoned back later and we got him to come into the band at that point in time.

Q: What happened with Davey?

CT: I can remember a rehearsal where his bridge had collapsed – and nobody had noticed. That’s how badly he was playing. We ran through three or four numbers and he was making this hideous noise. We didn’t comment. He didn’t comment. Then we started unplugging him, taking the leads out of the back of his amp and he still didn’t notice. Then eventually he did and got really hurt. “Who did that? That’s not fair.”

AE: He also broke his foot and took LSD while we were on tour. Which was not a good idea when we were doing interviews and stuff. I remember doing a radio interview when he was tripping.

Q: Didn’t you have a photo session for the sleeve of the Jet album which didn’t get used and instead CBS used an image from a DC comic called Mr Miracle, which they got sued for? 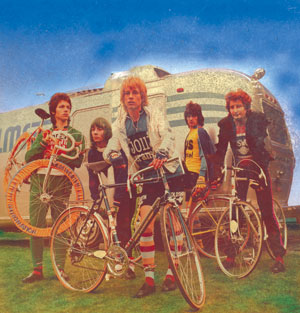 CT: Quite rightly so. It had been arranged that we were going to do this cover in racing bike gear and bikes at Stargroves. We were due to be picked up quite early in the morning – about 5am at our manager’s flat in Pimlico – but we’d gone off the night before and met Rod Stewart playing football. We ended up in J Arthurs, a well known nightclub down the Kings Road. There was me, Andy and Martin. So we got extremely drunk and silly. Martin fell into the river. He lived in a houseboat at the time.

AE: Yes, we tried to take him back home and put him on his boat, but he fell into the river. We dragged him out – he nearly drowned – and threw him into bed.

CT: We went to our manager’s and crashed out and then picked up Martin after having two hours sleep.

AE: Heading off to this place in the country.

CT: In the back of a van with a big bottle of brandy, with all this really flash lycra cycling clothes and the bikes. It was freezing cold and we were standing there thoroughly miserable. A terrible photo session – with the Rolling Stones mobile at Stargroves behind us (see above pic) .

Q: After Jet you also played drums on The Gorillas first single ‘She’s My Gal’.

CT: I knew Jesse only briefly. When he picked me up in North Finchley, to take me to the studios, he was very polite, but I could see he was bitterly disappointed seeing this long-haired glam thing strutting up the road. He expected to see the person in Jook – or at least a little bit more Mod-y, but of course I had the long hair and we were going to the hairdresser’s every two days to get our hair tinted and touched up. He said, “Oh no, you’ve grown your hair. It looks horrible!” While recording the b-side, Wait Till Tomorrow, I played this half beat laid back thing and as it fades out I’m doing a Little Feat-y pattern on the drums and he shouted, “Oi, leave it out!” You can hear it on the record.

Q You also played drums on the Trevor White ‘Crazy Kids’ single around the same time with Martin on bass?

CT: We did two songs. It was the day of FA cup final where Southampton beat Man United. I was desperate to watch it. I was thinking “Come on, we’ve done four takes, one of those should be good enough. They’ve kicked off 20 minutes ago.” Doesn’t say a lot for my commitment.

CT: Yes, there was a Mike Mansfield video done with Martin and I playing, which was used on the TV programme. I always found it really funny; the concept of Trev being a crazy kid. I think we were both about thirty at the time. “I wanna go up to my room and slam the door.” And I’m thinking “Trev, really, can’t you get some better lyrics?”