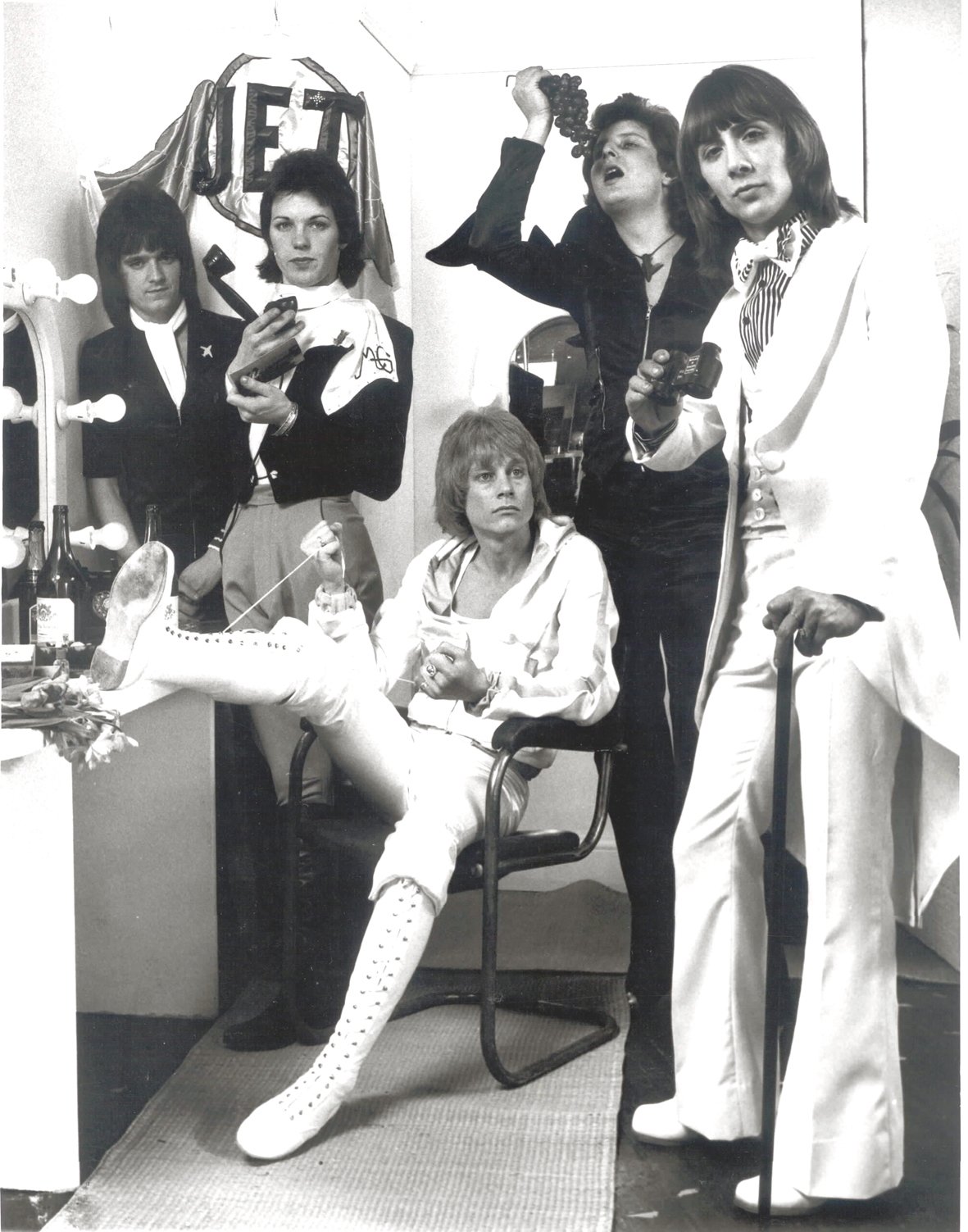 ‘In mid 1974 a large box ad appeared in the pages of (British music paper) Melody Maker: “Martin Gordon is alive and well and his bass playing is as stunning as ever, so any suitable offers please”. Recently sacked from Sparks, the Anglo-American quintet he had helped power to UK chart glory, Gordon was still waiting for strangers to call when friends started calling instead – Chris Townson, recently unemployed after half his band Jook, replaced Gordon in Sparks; and Peter Oxendale, Sparks’ live keyboard player, who was dismissed at the same time as Gordon. Townson brought along his old vocalist from John’s Children Andy Ellison, and a chance listen to the radio introduced the band to Davey O’List, once guitarist with the Nice and now playing lead on Bryan Ferry’s latest single. Jet were born, and one of the most unfortunate sagas in mid-70s British rock was about to unfold.

Everything about Jet screamed “success, and success, of course, breeds success. The individual musicians’ pedigrees alone were enough to win them a deal with Gary Glitter’s RAM management company. RAM attracted the CBS label; CBS brought in Queen producer Roy Thomas Baker. Gary Glitter’s costume designers were employed to create an image for the band – among the costumes they provided was one, for O’ List, which made him look suspiciously like an anteater.

But the bandwagon barrelled on. The band had recorded one demo, a three-track effort featuring Gordon’s ‘Start Here’, O’List’s ‘My River’ and the old John’s Children staple ‘Desdemona’, and already it was time to begin working on an album.

The press immediately picked up on the band, with O’List the most visible member. Aside from the Nice, and prior to his Ferry single, O’List had spent four months in the infant Roxy and he wasn’t about to disappoint his new-found media admirers. “You’ll be able to heart the influence of all the bands that members of Jet have played in, and I think Roxy is the strongest. But we won’t be going in the same direction as Roxy should have. [What on earth does that mean? Ed]. I believe we have picked up on things that were common to Roxy – but that weren’t Bryan’s thing – and also with Sparks. But that’s about all that is anybody else’s, otherwise the sound is very much our own. The vocals are totally down to to Andy, and it’s that which is a very distinctive feature of Jet.”

To Melody Maker he continued, “The music is very English. There are some obvious influences, but it’s not deliberate. The music does have those tendencies that are a part of Roxy but if you go back they were part of the Velvet Underground as well.” So, Roxy meets the Velvets meets Sparks meets the bits of T Rex that Ellison and Townson would have picked up when Marc Bolan was part of John’s Children with them. If anyone had a time machine back then, they could even have added Frankie Goes To Hollywood to the brew – a decade later, Oxendale would be one of the session men involved in the recording of ‘Relax’. Truly, Jet’s cup runneth over.

The odd thing is, a lot of what O’List said was true. [Don’t you believe it, matey – Ed again]. Gordon’s songs were very much in the mould of Sparks, drily facetious little sagas about life’s misunderstandings – the boy who tells his girls he’ll ‘give her a ring sometime’ and is now expected to marry her; the underdog who’d rather ‘sit in my corner and think about things like football and TV’ than throw himself into the social scene; the beast who tells his beauty, ‘I’m not a man of granite, I’ve got manners like a gannet’ – and all set to a jerky pop sound track that could indeed have fallen from a Roxy Music jam session. Add the entire band’s fixation with Monty Python and The Goons, and Jet wrapped up, indeed, a ‘very English’ sound.

So it made sense for their great unveiling to take place in Scotland, a short tour designed to let them preview their act, and unveil the nice new equipment RAM had bought them. But Chris Townson broke his leg playing soccer just days before departing, and while he and his indiscreetly plastered limb were able to make it to the band’s first photo session, where they were kitted out in 23rd century androgyny chic, clearly he was not going to be gigging.

Jim Toomey, a former Colin Blunstone sideman, was recruited in his stead, and Jet made their live debut at Queen’s Hall, Dunoon, on Feb. 28, 1975. In less than a month, they would be launching a tour with Ian Hunter and Mick Ronson, appearing in front of some 20,000 people as the outing progressed – a far cry from the minuscule turnouts they attracted in Scotland and a world apart from their appearance at the St. Anne’s annex of Glasgow University. Competing against the manifold attractions of a monster bar on the first floor and a massive disco on the second, Jet swept onto the third floor stage, a flurry of rhinestones and blow-waved hair, the curtains glided gracefully back. There were just two people on the floor waiting for them, and one of them was asleep.

Jet’s debut album, the amusingly titled ‘Jet’, had been recorded over Christmas and was scheduled to release toward the end of the Hunter-Ronson tour. To whet the world’s appetite, however, a single, O’List’s ‘My River’ was rush-released and bombed absolutely.

Quickly, a follow-up, Gordon’s ‘Nothing To Do With Us’, was rushed into the stores, and this time it clicked. Gordon was caught in Melody Maker prophesying a massive hit, insisting that his baby had “one of the most sing-along choruses ever” (it did as well), while NME it their Hit Of The Week, warning “you’ll find yourself humming it at every bus stop in town”.

This much was true. Intermissions on the Hunter-Ronson tour were indeed flooded by strains of ‘Nothing To Do With Us’, grimly rooted in every brain that heard it. But maybe it was too catchy, too memorable, too easily recalled when you wanted to hear it, because nobody bought the single and nobody bought Jet’s album either, when it finally hit the stores in mid-May. Nobody, that is, aside from Marvel comics’ lawyers, who objected to sleeve designer Roslav Szaybo’s unrepentant borrowing of a frame from Jack Kirby’s Mr Miracle, and pursued their case with relish.

Reviews were poor. Sounds’ reviewer thought the song ‘Brian Damage’ was actually called ‘Brain Damage’ and announced that Pink Floyd did the title better justice; Disc thought Ellison was a Russell Mael clone; and across the Atlantic, one American magazine described the whole thing as “third-rate Sparks.” Given Sparks’ standing in their homeland at that time, a harsher condemnation would be hard to find.

Oddly, the band agreed. “That album didn’t sound anything like it should have, or could have,” Townson complained. “Everything was so stifled – the band had been squeezed like a sponge. Every time we did a take, I was praying it was the last one. The only happy memories I have the whole time we were recording are the free sandwiches and squirting people with fire extinguishers. Everything else was horrible.” Producer Baker, it transpired, almost walked out when CBS asked him to make the band sound as much like Sparks as possible; O’List was already so disillusioned that by halfway through the Hunter-Ronson tour, Gordon late mused, “his off-moments were by far outweighing his on ones.”

Finally, the tour at an end, personal manager Jamie Turner took O’List for a walk in Hyde Park and broke the news that his tenure was at an end. O’List: “It was getting to be a ridiculous situation. We had all this gear lying around, and all we were doing was going over the same numbers every day. If we had been working, it might have been different. I really think that Jet could have done well if we’d gone out and gigged solidly, but no one else seemed interested in that”.

He was replaced by Ian MacLeod, a young guitarist introduced to the band when they advertised for a second guitarist earlier in the year, only to decide they didn’t really need one. Townson returned around the same time and found his bandmates in total disarray. A German tour was cancelled when thieves made off with the band’s equipment. A British tour with Fox (also produced by Baker) fell through; a Swedish outing was canned. Jet’s only activity was a handful of dates with ex-Glitter Band singer John Rossall, as he promoted his debut solo single that would fare no better than Jet’s own releases.

On Aug. 1 1975, the new-look Jet played their first – and, as it transpired, final – gig, at the London Marquee. The band then took six months off while Gordon wrote a new album (and auditioned, unsuccessfully, for the vacant bass position in Roxy Music), and in early 1976, CBS despatched Jet to a converted church in the wilds of England’s West Country to begin work. The label hoped for a new single – what they got, once someone from London actually bothered to travel down and check on the band’s progress – was what amounted to a concept album dealing with the evils of record companies.

Any band even remotely related to CBS was the subject of one new song or another, and from there, Jet started writing songs about themselves – “Tax Loss” was their particular favourite. In all, the band wrote and rehearsed sufficient material for a two-hour show, welded together so solidly that there weren’t even any breaks between songs, each simp1y flowed effortlessly into the next via intricate jumps, protracted segues and extended bridges. A couple of covers – The Small Faces’ ‘Lazy Sunday’ and The Beatles’ ‘Dear Prudence’ – were inserted for familiarity’s sake, but aside from that, the listener was on his own with Jet’s discontent. CBS dropped the band without a second thought; RAM followed suit and Jet were ready to give it all up.

Before they did, though, there was one last session, produced by another Sparks renegade, guitarist Trevor White. Island were somehow persuaded to show some interest in the band, and the band readied four songs for the occasion, led off by ‘Antler’, which Gordon insisted was about luggage but was actually his best yet condemnation of record company mentality (“you have no idea what this song is about”). ‘Don’t Cry Joe’ was the theme to an imaginary movie with a mild obsession with actress Charlotte Rampling (how does she rample?) inserted into the chorus; ‘Sail Away’ was about sailing away; and ‘Dirty Pictures’ was about dirty pictures – “I get my kicks up in the attic with my Kodak Instamatic.”
Townson quit when it became apparent that Island had rejected the session out of hand: but other labels would be keener. Well, one would, anyway. A full year after it was recorded, ‘Dirty Pictures’ emerged as the first single by a new Ellison/Gordon/MacLeod collaboration, Radio Stars. And therein hangs another tale entirely.’