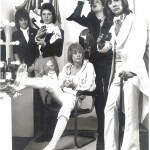 Long before Roxy Music and Bryan Ferry, there once was an English glam-rock band, prone to dance and sing nude through the streets. At the height of Flower Power, John’s Children were the archetypal campologists. And their lead singer was one Andy Ellison, a good looking dude with a quaint way of pronouncing his lyrics. After long years in obscurity, he has returned with new band Jet, already creating a stir despite the greater acclaim accorded those who followed in his wake. Steve Lake talks to Andy about his weird career.

So who’s this slightly built, blonde haired vocalist with the masochistic streak exchanging blows with the bassist before hurling himself twenty feet from the stage into the audience? And now he’s stomping around the aisles, hurling feathers in all directions while hollering “Sieg Heil”. Well, it sure as hell isn’t Iggy Pop, even though it reads exactly like some script for a “Fun House” movie. All that’s missing is the peanut butter. No, here we’re flashing back to a long-gone era, back to a time when the Ig was tentatively miming to Doors albums in front of his bedroom mirror. The rock and roller in question is one Andy Ellison, now the front man for new signing Jet.

Back then he was one quarter of John’s Children. It’s all rather vague in Ellison’s memory now, the whys and wherefores evaporated with the passing of time. In truth, it was probably pretty unclear precisely what role John’s Children were supposed to be enacting back in the middle sixties, even to the band and their manager Simon Napier-Bell; but, irrespective, with a maximum of naivety and a minimum of recognisable playing chops, the group seem in retrospect to have been an encapsulated prediction of Things To Come. Their history is the very stuff of fanzines. Formed in Surrey out of the ashes of an r’n’b band called The Few, which changed its name to Silence and finally to John’s Children, band manager Napier-Bell had a rather nice line going in ironic juxtapositions. When the band began making singles, first for EMI and then for Track, these surfaced.

Probably taking his cue from the similarly controversial Move and (their manager) Tony Secunda, Napier-Bell had a flair for studied outrage. Thus the first single “The Love I Thought I’d Found” was retitled “Smashed Blocked” for the States and, according to Napier-Bell, was not about drink or drugs, but about “illicit sex”. Similarly “Not The Kind Of Girl You’d Take To Bed” was an anti-drug song and so forth. For Stateside consumption only, an album “Orgasm” was thrown together, recorded live in such hallowed halls as Tiles (remember?). The second single “Just What You Want” made a minor impression on the chart, clocking into the lower twenties.

By this time the band had acquired a new lead guitarist, a nineteen-year-old from Wimbledon called Marc Bolan. He joined Ellison, drummer Chris Townson (now also with Jet), and bassist John Hewlett (now Sparks manager) at a particularly intriguing time – just as the whole psychedelic shebang was beginning to dominate the scene. The Children decided to take the freak-out invitation pretty damn seriously. “At the Alexandra Palace 14 Hour Technicolor Dream, our whole set comprised of Bolan with the guitar balanced on top of his head causing ear-splitting feedback. There was no music, just an hour of strange noises. At other, times Marc would lob chains around and kick in the speaker cabinets. They took a lot of destroying, those Jordan speakers”.

A string of timely singles appeared. “Desdemona” became the most widely known, and was actually banned on account of its harmless chorus line “Lift up your skirt and fly”. But there were two more, “Come And Play With Me In The Garden” – a Flower Power remake of the B-side of “Desdemona” (originally entitled “Remember Thomas A’Beckett”) and “Go-Go Girl,” which was a remodelling of Bolan’s “Mustang Ford”. Plus, of course there were the infamous nudie pics, the group posed coyly behind strategically placed flower bouquets. “We were actually quite a violent band, never very much into peace. If anything we were taking the piss out of Flower Power, though nobody ever saw it as that”. John’s Children’s demise was an archetypal example of a young band being too green to handle it’s own destiny. Somehow they got stranded in Germany, their equipment was ripped off, Townson fought with Hewlett, and that was that.

Ellison embarked on a half-hearted solo career, not gigging, but releasing a few singles for the CBS subsidiary SNB Records run by, you guessed it, Simon Napier-Bell. These were “Fall From Upper Eden,” Lennon and McCartney’s “You Can’t Do That” (truly the definitive version, with girlie soul chorus and very Anglicised lead voice) and “lt’s Been A Long Time” (later featured in the movie “Here We Go Round The Mulberry Bush”). All of them flopped quite spectacularly. He’d done some film editing for “Mulberry Bush” and decided to push that line a while, getting into TV adverts before fulfilling an old ambition to do stunt work, that old masochistic tendency towards self abuse returning. Inevitably this palled too, and Ellison packed a rucksack and moved out, bumming around Greece and the Cote d’Azure and the sunny side of Spain. Mostly he was simply killing time, waiting for old contracts to expire. But he was watching too, and strange scenes were happening in Europe. Old colleague Marc Bolan was suddenly very much in the ascendant. “Well, I was more than a little envious at all those T. Rextasy stories, but I wasn’t totally surprised, because Marc was always a very well organised, determined young man. His songs, at least his early songs, were all very good. I haven’t seen Marc for about seven years now – it’d be very interesting to meet and talk with him again”.

Back in grey old England, Ellison together with Townson – his closest friend throughout these troubled times – concentrated on the finer arts, and got into painting, finding some kind of stability there. Andy devoted three years to the canvas. Which brings us finally up to date. Jet was formed last year, out of the remnants of Jook and the first English incarnation of Sparks, and guitarist David O’List was brought in on the strength of his contribution to Bryan Ferry’s “The In Crowd” single. Their first album “Jet” was released last month, as was the single “My River”. A second single, “Nothing To Do With Us,’ a remarkably catchy piece of pop trivia, is imminent and threatens to be a major hit. They return to the studio in September.

To go out on a trivial note, just how old are you now, Andy Ellison? He blushes slightly. “Ah. According to my biography with Jet I’m 24, but in fact l’m 29. I dunno what you want to make out of that. I can’t get too worried about it personally. Everybody in Jet’s been giving away fictitious ages in the hope that our youthfulness will attract a young audience. Hehaheheh. Well, Martin and Peter (Oxendale) are young – Martin was only aaahhhh 21 last week”.