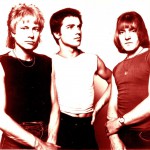 Some came to catch the Boomtown Rats (who had cancelled at the last moment) but, despite the substitution of Chiswick’s Radio Stars, there were still many waiting impatiently to get in long after the fire limits were satisfied and the doors shut. Those out on the street missed a bunch of sharp, hard-hittlng New Wavers with a bright Pop Image not so far removed from Slik or Kenny. Fronted by Andy Ellison (who was in there last time with Marc Bolan in John’s Children) and former Sparks bassist Martin Gordon, Radio Stars came on with the same sort of heart-flutterlng good looks that slipped down Tom Petty’s nose. Sexual arrogance in short hair and a clean white t-shlrt. They looked like the sort of boys mothers always warn their daughters about. Horny and wild.And, naturally enough, with a single to their credit entitled ‘Dirty Pictures’, Radio Stars confirmed all such suspicion.

Live they were just the same. Slamming straight into ‘Don’t Waste My Time’, the four piece began like they meant to continue. Fast and flashy, very loud, almost heavy, but above all clear and uncomplicated wIth a street-corner sneer. And by the time they’d been through the catchy ‘No Russians In Russia’ (from their new EP ‘Stop It’) and marked the halfway point wIth the highly impressive ‘Dirty Pictures’ itself, the band’s individual experience and expertise was obvious to all.

With former Houdini drummer Steve Parry playing only his second gig with the hand, Radio Stars naturally lost their footing from time to time. That’s fair enough; they need time to break it all in. But when Andy Ellison chooses to sing a song rather than shout it, then Radio Stars know themselves as masters of pop/rock melody and head up an alley no one else has bothered to check out yet . . . not on this side of the Atlantic any way. And who knows how they’ll end up… as Radio Stars, perhaps?