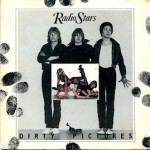 Radio Stars are a pop group, which is not a bad thing, especially when you’re beginning to get bored with all those bands who are diluting and distorting the original flash and excitement that was ‘punk’ by slavishly adopting the stance/attitudes of the Pistols and Clash. Andy Ellison knows better than to try any of that stuff, especially since he was one of the true British protopop punks of the Sixties, lead singer of the legendary John’s Children. What you get are memorable songs with quirky lyrics (‘there are no Russians in Russia / there are no Yanks in LA’), solid bass lines overlaid with Seventies heavy metal trash guitar (like Starz meets Lita Ford), and Andy’s Iggy Pop-style exuberant stage presence, which led him to strip to the waist, do backflips, leap onto the amps, jump in the audience, attempt to kick a bouncer on the ass, incite the audience to invade the stage, swing from the rafters (causing sparks to shower the audience from a faulty light cable), crawl on his belly, tear off the left leg of his trousers and generally act like the newfound wild man of rock’n’roll.
The audience loved it, of course, they’ll always respond to a crazy onstage performer, someone to act out their fantasies for them; but the band have more than that ’cause they can play pretty well, as they proved by thrashing their way through an energy-packed set that included the excellent ‘Dirty Pictures’ single and stuff from their EP like ‘Johnny Mekon’, plus a Flamin’ Grooviesque ‘Shaking All Over’. The crowd seemed to be taken a little by surprise when the set ended and just stood as though they were in a bus queue. The encore got demanded eventually, though. I confess my ignorance, but I think the last song was John’s Children’s renowned ‘Desdemona’, And does lyric really say, ‘Desdemona, lift up your dress and speak!’, or sumthin’ like that? Like I said, Radio Stars are a pop group, although I think your mother might not like ’em. I bet you would, though.’
Sandy B Robertson