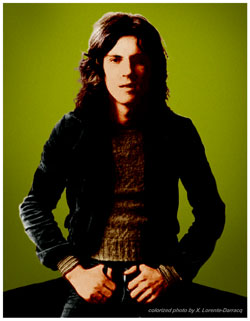 Adrian Fisher played guitar on the Sparks’ album Kimono My House. In 2002, drummer Olof Bergius from Stockholm presented the following recollections and pix of Adrian. They date from 1999, the year before Adrian died and the setting is Thailand…

In Olof’s words: “I met Adrian working as a musician in a holiday resort town called Lamai Beach in Ko-Samui, Thailand. Adrian moved to Bangkok around 1990 and started playing at clubs like The Saxophone and others. Bangkok has an exciting nightlife with a lot of interesting musicians, but he didn’t like the traffic jam and the chaos and pollution so, when he met Juppa (his girlfriend), they decided in 1991 to go down to Paradise Island Ko-Samui, where he soon received guitar-hero status. He was well known for playing in suits and jackets despite the heat but was also a little bit “thirsty”. I met him in the winters of 1997, 98 and 99, so that’s the period I know myself. He played as a blues-troubadour with his own band and as a guest artist with other bands. I played drums with him on maybe 25 live gigs.

He also sang lead with a cool, slow Hendrix-sounding approach. He played only blues then, influenced by Clapton and Gary Moore! ( he replaced Gary in Skid Row) and was playing the same style, maybe better ?! but without such good amplifiers…Thailand is Thailand. He had a serious relationship with a girl from Bangkok who, so I heard, is now living at his mother’s place in London. In 1999 the BBC made a documentary about 3 people and their life destiny…including the story of Adrian in Thailand.”

He died in April 2000 and I heard that he fell down right after a gig at Ko-Samui.  I met some of the Thai musicians there after he died and I got the story. He played alone , felt bad and walked offstage in the middle of the set, took a rest and went back on stage again, tried a few numbers but felt even worse and finally he had to take himself home – in some way – in the end he was creeping on the street trying to make it but died in the middle of the street. The official death cause was myocardial infarction, but all who knew him know that it was years of drinking beer and not eating proper food. Of course he didn’t drink to start a fight or something, but when he drank a beer here and a drink there, and as long as he could play the guitar, he was happy for the moment….

In his mind he knew that he had to change lifestyle but it’s difficult living on a holiday resort 100 metres from the sea and 25 metres from the nearest bar. And he lived in this ‘reality’ day after day, year after year. When he finally did try to change things, it was already too late. BUT, he didn’t use drugs.

I would say that he was one of the best guitar players around in that 70s era (the music from the 80s and 90s is best forgotten, in my view). I talked to Andy Scott from Sweet a couple of years ago and he mentioned Adrian as one of those few who really could PLAY the guitar. So if things had turned out a little differently he could have been that guitar hero he had the ability to be, instead of….”

Another recollection from Patrick Saintpo came via YouTube in 2013:

“Adrian Fisher was a good friend, We spoke a few hours before he died of a heart Attack in the middle of the street. he was one of the best guitar players i ever saw and heard. he really was a nice guy but was drunk every night and got aggressive often with his girlfriend witch is featured also in this video. I loved parts of his personality, but hated his drunk side. As a guitar player he bursted of talent and he teached at least one of my Thai friends to improve his guitar playing immensely.

On this video clip he plays in “Bikers And Rockers” (Don’t Exist Any More) at Lamai. but he played memorable sets at “Secret Garden” on “Big Buddha Beach” which also has changed proprietor……that were good times on Koh Samui some 20… years ago. Everything has changed, and not always for the best…..

The reason he died?….He lived in a cheap bungalow, but the reason it was cheap was that it was next to a discotheque which paid off the police to play all night. (I was sleeping in a bungalow on half way on the other side of the Bay and could hear the bass sound very good) (Official closing time was 1or 2 o clock in the morning) Adrian took pills to be able to sleep. Personally I think (it was) the combination of sleeping pills and alcohol.