After a mere 41 years of prevarication, obfuscation, incompetence, fraud, downright lies and carrot hedgehogs (naming no names, and especially not the hedgehog), I finally lay my hands on my gold record for ‘Kimono My House’. It must be mine, it’s got my name on it. The quoted figure (for UK sales only) omits the first 20 years-worth of sales but beggars, as I have come to realise, cannot be choosers. 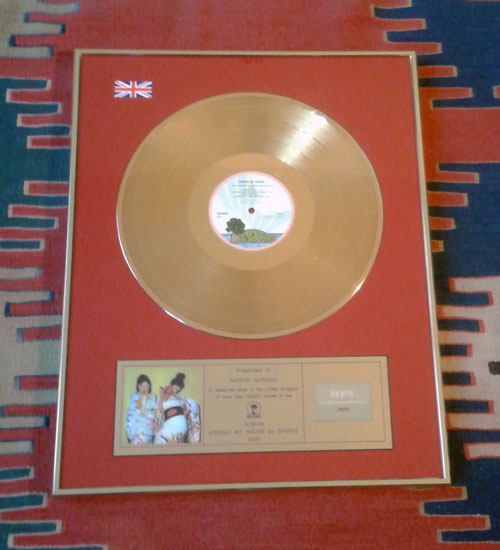 A large thumbs-up to all those who supported me in the quest and who continue to do so – it’s most appreciated. A big fat raspberry to those who, by either commission or omission, and sometimes both, didn’t, and they are kindly invited to boil their heads.

Before waltzing off with the thing, however, I was requested to hand over my credit card to pay for it. Sales of over 900,00 units globally do not count for much in the savage reality of the Mole-kosmos.

The figure of 139,000 is for the period of May-September 1974 plus the years 1995-2014. At this point I could detail my tedious conversations with Universal (“We only bought the catalogue in 1995 and have no prior sales figures“), the BPI (“We don’t collect that kind of data“) and the MPCS (“We have destroyed all paper records for the period 1974 -1995“), but would run the risk of boring readers to death. 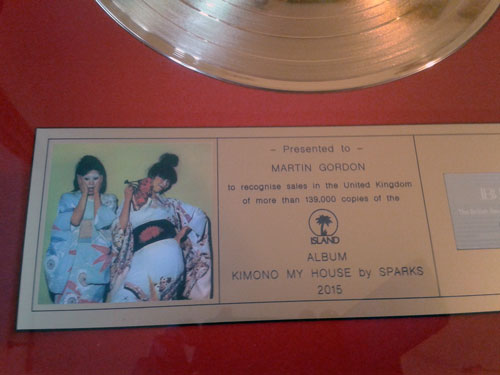 The band, or perhaps that should be the ‘band’ as I wasn’t around at the time, were awarded gold discs when KMH went gold, i.e. mid-1974. Adrian, Dinky and the ‘boys’ received their discs at that time. Mine went mysteriously ‘missing’. Much subsequent effort has been spent trying to define ‘missing’. Various suggestions have included ‘can’t remember’, ‘it might be in my attic, I’ll have a look’, ‘not me mate, I never saw it’ and so forth. Finally, it occurred to me that unilateral action might free this semantic and moral log-jam. And it did.

But at least a line can now be drawn under this tawdry episode. Now back to the Rickenbacker – onwards, upwards and forwards in all directions!!!