‘Post-Woodstock malaise terminated by tour-de-force of rockin’ Innocence – is this paradise regained? Gushing Ian MacDonald thrashes out the implications

SHEESH! One way or another, 1974’s turning out to be quite a year for rock ‘n’ roll. If things carry on the way they’re going, these twelve months might just be the most vital we’ve enjoyed since, coo, it must be 1967, mustn’t it? ‘Kimono My House’, y’see, is an Instant Classic – the third this year (the others being ‘Pretzel Logic’ and ‘Todd’,  all of them American New Wave, too. But where Steely Dan and Todd Rundgren are working over fascinating refinements of rock-as-she-is, Sparks have gone one better. “Kimono My House” signposts a sea change in the genre: rock-as-she-will-be – or at least could be.

In an interview with the laid-back James Johnson (NME April 3), group songwriter Ron Mael had this to say about Sparks’ position: “These days nobody’s primitive and l don’t think you can set out and pretend you are. Once you’ve lost your innocence, you can’t go back. If we tried a naive approach, it would come off really contrived so we really make contrived songs so it’s eventually less contrived”.

This is “the counterculture’s musical malaise” in a nutshell. With increasing rapidity after about 1969 (Woodstock, what else?), rock underwent a traumatic Loss of Innocence in all departments, a disastrous thing to happen to a genre which has relied upon untutored spontaneity more completely than any other I can think of. There are three logical ways out of such a dilemma: (I) you can place a curb on excess, maturely take stock of your personal situation and then with the maximum amount of dignity possible – close up shop; (2) you can fight it with everything you’ve got, insisting that the Loss is mainly spiritual and that the account be at the very least balanced, even if not actually carried back into credit; or (3) you can somersault through that invisible barrier of imagination which every human endeavour runs into now and then, and simply burst open the accepted boundaries of what’s possible. Much as I admire them, I think Steely Dan ultimately fit into category No I (examine the career of The Band in terms of their being an early anticipation of this solution, and you might see what I mean). Todd Rundgren is certainly into category No 2 with a vengeance. On a pure sound level, Faust were the earliest stirrings of category No 3 but they gave up almost immediately (in retrospect, it was all probably a great big accident in the first place). But Sparks… well now. They’re really there. How can you tell? Look at it this way – if anyone’s going to escape from an age 0f Innocence Lost, he’ll have to do it (as Ron Mael points out) with his sophistication. There’s no way you can de-sophisticate yourself; it’s an accumulative process in the same way that you’re a day older every morning you wake up. However, if you move out of one age into another it’s got to be independent of antecedents (as was, say, Impressionism in art) – which means it’ll begin again in Innocence.

Thus, Roxy Music, for example, would appear on paper to be trying for the same thing as Sparks – but do they sound Innocent? Quite the opposite They’re the end of the line which Ron Mael’s just got off. Sparks are ..there by virtue of the most startling facet of this exhilarating and unnerving their new-found Innocence.

This may not interest you too much if you don’t know the earlier records – but one listen to “A Woofer In Tweeter’s Clothing” {in which they court the danger of sinking into the murk as the ultimate effete after-hour band winking their time away in a self-consciously ambivalent cultural twilight) followed by a hearing of “Kimono My House” {in which they manifest the unblinking gaze of the new-born) will rock you on your heels. 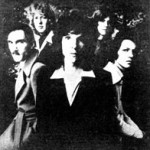 Of course, it’s actually all just pop music. Stuff to dance to. Sparks probably only know that they’ve never felt better in their lives. Cliché coming up: how can you communicate the flavour of something totally new? Some people have heard this album, laughed hesitantly, and said; “It sounds like he writes his tunes and then makes the others play them backwards.” OK, all the accoutrements of rock are still here, from electric guitars to A-A-B-A and common time But Ron Mael has set the whole lopsided wobblyman of technique and tradition” spinning again. Melody lines spiral up and down (care of the extraordinary voice of brother Russell) through intervals and over chords that seem to echo from somewhere in The Classics. A few Brahms melodies in there, methinks.

But whatever he’s up to, he’s breaking most of the rules and the band sound like they’re delighted to help. A predictably astute production by Muff Winwood allows every last drop of sensitivity and energy to come clearly through. And there’s more energy on “Kimono My House” than anything I’ve heard since you know when. However, let’s stick to the tracks themselves. There are ten (five a side). I’ve listened to the album about six times and nearly all of them sound like standards already.

Looking around for the flaw, I seized on “In My Family” as the weakest track; it may be but once you turn it up, it all becomes relative (as do most of the human race in Russell’s lyrics – “Now you’ve got your Rockefeller/And you’ve got your Edward Teller/And J Paul Getty is a splendid feller/ But none of them would be in my family.”) Opener is “This Town Ain’t Big Enough For Both Of Us”. You all know about that (just keep buying it, alright?) Next is another candidate for singlehood except that the whole album is done a la ‘singles consciousness’. “Amateur Hour” stamps along at a typically hectic pace, its infectious chorus cutting the bar-lines with all the iconoclastic determination of mid-period Beatles.

Of course, it doesn’t sound like them; doesn’t sound like anything you’ve ever heard, really – except maybe Roxy at a hundred MPH and shorn if all that monumental weight. Speaking of which, the preceding number, ‘Falling In Love With Love With Myself Again’ cops the “Song For Europe wall-of-sound perfectly. But again, it loses the aforementioned immediately with its harmonic freedom and swaying waltz-time.

The words here set the tome for the album – calm, confident and full of self-debunking laughter: “I bring home the bacon/I eat it myself/here’s to my health”. Ah, that’s the stuff. On “Here In Heaven”, a song concerning a lovers suicide pact which one partner honoured, the boys cut loose – Russell with his stratospheric blend of Marc Bolan and Tiny Tim, made much more by his clarity and East Coast high-society enunciation, the rhythm-team of Adrian Fisher (guitar), Martin Gordon (bass) and Dinky Diamond powering into lift-off. The first side closes with the set’s best song, “Thank God It’s Not Christmas”. Pure magical originality.

Autobiography? Whatever it is, the opportunity for a good toothy snarl here has been rejected coolly by Ron in favour of his customary rule of being witty and humane simultaneously. Now that talent’s an asset. alright. (Or maybe it’s all in the breeding?). “Complaints”, featuring Russell as the man in charge of handling dissatisfied customers in a department store, confirms the hints of classical influences with its heavy onbeat and upward-trending sequence. An odd interval in verse I captures perfectly the notion of being a professional evaluator of breakages – and, once again, the band get stuck well in on the fade-out (the fades being particularly good throughout).

Then there’s “In My Family”, and then the problem of concluding something like this. How, man? Simple. Just rock the listener back to ground level with a lullaby (grin, grin). No compromise, “Equator”. It’s the weirdest number on the album. Another lovers tryst gone wrong, Russell, in a quite extraordinary vocal performance, complains that she’d promised to meet him at the equator (“Surely we said it was March the tenth?”). Finally presuming that she “must be just around the bend”, Just take a look at the superb cover shot of the two geishas – the one on the left is listening to “Kimono My House” for the first time (she’s probably just realised how Russell Mael is going to finish “Equator” and isn’t quite sure whether she can take it); the lady on the right with the cocky wink and the opened fan has heard the whole deal and is “there” with Sparks. Yessiree, this record makes you jump in every sense. By all means get your copy of “Diamond Dogs” (who knows – it may be exactly what you’re after). But don’t be fooled: “Kimono My House” is the real breakthrough – I think you’re gonna love it”.