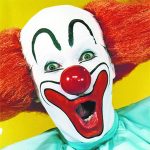 And me on drums!

Sometimes (well, often, actually), things are just so weird that you can only say “I beg your pardon?” and continue life as if the inexplicable was the norm. For all those interested in ‘operatic clowns’ and the Jam (now there’s a niche market if ever I saw one), read on…

“The band Time UK formed with me on drums, Ray (Simone) on guitar and Jimmy (Edwards) on vocals. We… felt the band was incomplete and so arranged auditions for a bassist and lead guitar. The first bass player was Martin Gordon from Radio Stars and Sparks but we only did one show with him, a warm-up show at the Kings of Wessex School, a gig secured by my brother John who was teaching there at the time.

We seemed to go down quite well despite the fact that Martin went on stage dressed as an operatic clown. We were as surprised as the pupils. He was a very good bass player but he didn’t really fit in. Jimmy was all for sacking him but didn’t have the courage to do so and so the unenviable task fell to me at the next rehearsal.”

Does the perspective of a Sarf Lunnon yob have anything to do with it? Hmm, there’s a thought. For answers to these and other pressing existential problems…. do not look here. I do know what ol’ Rick means about not fitting in, though. If one of you turns up ‘dressed as an operatic clown‘ and the rest don’t, even accidentally, then there is clearly some communication problem, in my book. Glad we’ve cleared that one up.