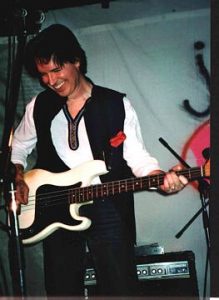 “A cold night in Camden. John’s Children. Pay £5 on the door, get your hand stamped and you’re heading upstairs. You reach a locked door, hear the sound, go back down a floor and you’re at the bar. You join the beginning of a Camden crowd. This is where bands should be made to play – small, scruffy, atmospheric.

What’s more important, legend or living reality? It doesn’t really matter with John’s Children. They’ve got both. A 1960s legend to die for (please don’t) and the ability to play a brilliant live set in the 21st century.

They couldn’t play a better gig than this. Straight into a roaring But She’s Mine and a speedy, no sea gulls It’s Been a Long Time. Later, Gulliver Smith, a grinding Sara, Crazy Child, the Mustang Ford version of Go-Go Girl, Jagged Time Lapse, Arthur Green, Midsummer Night’s Scene (excellent Petals and Flowers from Boz), Eleanor Rigby and Day Tripper. Right order? Probably not but all routes lead to Desdemona so who cares?

John’s Children are simply magnificent tonight. Martin Gordon’s smiling bass complements Boz’s tight, exciting, excellent guitar mania. Chris plays drums like Sampras serves aces (but with a different rhythm) and Andy is the best person in the world at being Andy. Tonight, he rocks, he rolls, he rocks again, he’s on the bar, he’s hanging from the rigging. You don’t think he’ll have time to sing and play. But he fits that in too. A big crowd loves it and so they should.
I worry about these boys. Something ought to be done about them.”

This one was called Mustn’t Grumble – The Steve Marriot Memorial Concert for one of the UK’s greatest ever singer, the indomitable Steve Marriot. Well, you probably figured that out already. It’s a bit of a blur, thanks to Persians. I recall three things: we performed the iconic Lazy Sunday and some other tune; we had an organist; we made a god-almighty cock-up right in the middle of the Lazy Sunday (I say ‘we’, but I do not include myself, obviously). For this reason I have never dared to watch the DVD release of this occasion. Following the gig, we repaired to the Hilton and Noel Gallagher picked  up the champagne bill, which was very nice of him given the quality of our performance. Four things.

But the gig is memorable for another reason. Also on the bill was Humble Pie, and of course the bassist was my long-time hero (from Spooky Tooth) Greg Ridley. After our short set, I went out to listen to the next band, and saw Greg standing in the side aisle. I had prepared for just this opportunity by bringing the recent Spooky Tooth album (Cross Purpose) with me from Berlin, and I shot backstage to get it.

Having introduced myself to Greg, I proffered the CD booklet and requested his signature. He was enormously tall. He grabbed it with a beefy hand (which had ‘LOVE’ tattooed across the knuckles – the other hand read ‘HATE’ – and snarled “What, this piece of …..  SHIT?!” “Hmm, well… yes, actually” I said. Wordlessly he scrawled his name, thrust it back at me and turned back to watch the band. In truth, he had a point, but I felt that this was not the time to discuss it. 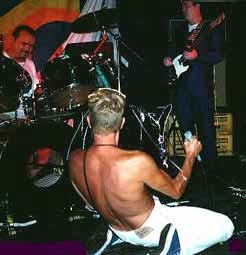 Compared to the Unkel fiasco (see this gig report) it was another world. Chris had his own drum kit and Boz used his Bolan cabinet and everything was loud and groovy. Andy encouraged the audience to play ping-pong – he thoughtfully provided bats and balls – and threw 200 party-poppers into the crowd. (A disgruntled clearer-upper said after the show ‘Could you PLEASE use biodegradable party-poppers next time?!?!’. This was Camden, after all).

We could all hear each other (very unusual), Chris was on manic form and Andy postponed taking the long slow walk back to the pavilion for at least another few months. Boz got his theremin out and I played so fantastically that some bloke came up and told me I should be in Jethro Tull.

It was the same bloke who came into the dressing cupboard before we went on and said to me “John’s Children?” “Yes”, I said, “can I help you?'” “You were fantastic!!!!”, he said. “We haven’t played yet”, I said. “I’m sorry, I don’t know what I’m talking about”, he muttered and left.

Other people were less confused. All in all, one of the best gigs we’ve done since I’ve been around. 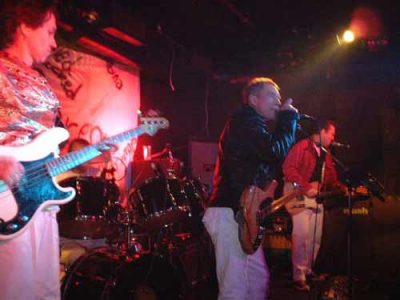 Thanks to the World Trade Centre being knocked down, Rolan Bolan was unable to make it over from LA for this gig which commemorated the 24th anniversary of the death of his father (that’s Marc, for any passing Venusians). John’s Adults blithely ignored collapsing buildings to deliver a programme which disturbingly included material that was ONLY 20 years old. This alarming state of affairs was explained by the general state of shock that the civilised world and JC fans found themselves in on the occasion.

‘New’ material which shocked the hard-core JC contingent included 20th Century Boy, Children of the Revolution, 3rd Degree and Hot Rod Mama, the latter two being rather turgid 12-bars but the other two being pop gems of the first order. Vast swathes of JC material was literally dropped in order to make space for the musical  interlopers. The stage was draped with US and UK flags and Chris had his own drum kit, so all was well with the world. Twas very loud – Andy jumped on various people’s backs and took his clothes off, Boz did the look-no-hands guitar solo, the drums were chucked into the audience and the beer-sodden stage was mopped up and thoughtfully squeezed over my head by the ever-attentive lead singer.

It was a laugh, thanks in no small degree to the attendant Mexicans, who had ousted the Persian but whose presence was palpable. Will there be any more?  Who knows – is there any more left? It was followed up the next day with an impromptu appearance at the Bolan convention meeting  in Golders Green, where we performed ramshackle acoustic versions of Sara and Desdemona to a gagging crowd of satin-trousered Bolaneers who were no better than they should have been.

Returning once again from Istanbul, I join John’s Adults for another retirement gig at the Monarch in Camden, London. Publicised tirelessly by Andy using his favourite 40 year-old pic of the band, the gig premieres some new material. Perhaps ‘new’ is misleading – ‘not as old as it could be’ would be more apt, if a bit clumsy. A Harrisong is included in memory of the recently departed Beatle – Here Comes The Sun sounds great, if somewhat simplistic, in it’s new JC-friendly loud format.

A few Bolan tunes are also thrown to the baying crowd – 20th Century Boy, Children of the Revolution and a nameless 12-bar. A few old JC faves are notable by their absence, and an old JC face is notable by his presence. Repeating his vastly successful, if unsung, appearance on stage last Xmas, Chris Marshall of Brighton performs his traditional Xmas stage invasion, this time to claim his JC prize of a party popper personally presented by Andy Ellison. Andy is recovering from a recent savage mouse attack, but it doesn’t hold him back, apart from his traditionally-fumbled guitar intro to Cosmic Dancer. Well, it was in tune when he bought it.

Chris Townson is suffering from the serious disadvantage of not being able to look up quickly but again soldiers on like the trouper that etc. etc. etc. and the show finishes with an impromptu drum solo. The dawn breaks, the rooks are cawing in the trees and the Society for Unfinished Things are holding their AGM again before he finally, thankfully, calls it a night. The Mexicans, Persians and Germans make their presence felt and a splendid time is had by all. 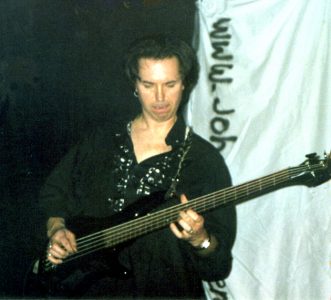 “I know Boz plays mean sax in his spare time. However, one guide’s preview of this gig was cause for some anxiety: “Acid jazz band headlining play sharp, cool psych-beat pop”. It wasn’t so much the cool, psych-beat or pop, but how exactly was the acid jazz going to be fused with “Arthur Green”?

Concern was quickly dispelled by a blistering opening, fusing together Mustang Ford, Gulliver Smith and Sara, Crazy Child. The sound was excellent and the band very tight from the start. Mid-set gems included “But She’s Mine”, a driving version of Arthur Green (no 25 minute improvisation after all then) and a powerful Cosmic Dancer. Two Radio Stars numbers varied the set and were well received, especially No Russians in Russia. Probably for the first time, there was a full JC version of the Stones’ (This Could Be) The Last Time and Andy re-joined the band from the bar area for Desdemona, Day Tripper and Daddy Rolling Stone.

Boz played concentrated and explosive lead, and Chris was at his powerful best, even including a brief solo as a surprising postscript to one number. Andy, fresh from the gym by the look of things, fronted the band in his normal hyperactive style, making good use of union jack skirt, towels, stage scaffolding and removal of clothes by installment. Martin’s satanic kaftan look was generally compatible with his apparently reflective mood – his muscular bass playing was impeccable, as usual. This was another brilliant gig, confirming John’s Children as an effortlessly vibrant, exciting modern outfit, not just a sixties legend.”