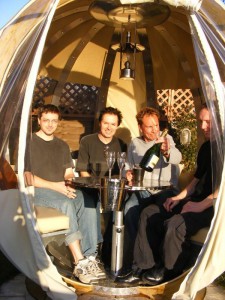 Rehearsals take place in sunny Wraysbury, where deafening music attracts the swans, gathering outside on the Thames to register their protest. We add oregano to the second chorus, and take refuge in the Wine Ball when it all gets a bit loud, which is often, thanks primarily to drummer Steve Budney. We have allocated three days for rehearsals and, once we have figured out how to get from song to song without long pauses for argument and recrimination, it suffices.

We visit the local pub to consume large quantities of what the Americans amusingly refer to as warm beer and to meet the local rock legend who kindly takes the time to bore us rigid with his tales of near-fame and almost-celebrity in the Sixties. Drinking large quantities of beer in an effort to avoid his tedious attention, we stagger off into the night. Rehearsals the following day are somewhat muted, despite the rejuvenating effects of the outdoor jacuzzi, but the whole thing has begun to hang together rather well. And the rehearsals.

We prepare something new, a version of ‘Terrible Mess’ which now has the trademark Radio Stars treatment stamped all over it. It is impossible (and pointless) to resist. Given our exalted company on Saturday, ‘Johnny Mekon’ is renamed ‘Johnny Moped’, and we briefly consider making our entire set a tribute to this former (and current) supermarket shelf-stacker, but wiser heads prevail.Two final run-throughs (runs-through?) on Friday, and we’re all set to entertain those citizens of London who still live for (or perhaps in) those events of three decades ago, and in this we will join forces with Penetration, the Damned, Johnny Moped, the Shapes, the Yobs and TV Smith.

We drive to the Forum regaled by London’s leading radio station. ‘Aht to Wonka. Aht to Jo the bitch. Aht to the Willesden posse’. The entire programme consists of dedications such as these, and the music, or rather ‘music’, is entirely secondary. Well, at least it gives us something to talk about. After lengthy negotiations with Keith the gatekeeper, we are reluctantly allowed access to the car-park behind the heaving Forum. We head to the production office, where we are instructed to ‘come back in 10 minutes, someone’s been stabbed’. The instruction is yelled out of a tiny room stuffed with 30 people, all shouting at each other and simultaneously drinking industrial alcohol.

Our allotted dressing room is vacant, so we move in and prepare for the big moment. It later turns out that the stab-ee is the stage manager. There is no sound check, which is to be expected, but we are to use the gear of the previous band the Shapes (thanks to the heroic efforts of their skydiving bassist Gareth Holder). Avoiding knife-wielding maniacs, we take to the stage much as planned. The intro rolls. Ian is nonplussed by the sheer quantity of knobs available on his amp, and assistants twiddle them until a suitable result (i.e. noise comes out of it) is reached. As the intro is already rolling, this exercise is brief, and we catapult into ‘Good Personality’ with only seconds to spare.

The crowd know the tunes, they sing them where appropriate, Andy climbs aboard a reluctant bouncer, he disappears into the balcony, he dances with his daughters and a fine time is had by all. Even our first-time-ever version of ‘Boy Meets Girl’ seems to receive acclaim.The stage manager (a currently un-stabbed replacement) appears towards the end of the set and gesticulates violently towards drummer Steve Budney. Fearing that he is about to be the victim of another senseless knife attack, Steve quits the drum stool, declaring that it is all over and he is departing immediately to Boston. I do not share his opinion and announce the final song, for which he graciously returns. We leave the stage to a hail of applause and find the dressing room has been taken over by a gang of yobbos. They make suitable offerings in lieu of rent, and the room is then invaded by people offering congratulations, compliments, drugs and nautical insurance policies.

The second highlight of the evening is getting back home to Wraysbury in time for the final of the X-Factor, the reality TV show currently gripping England. All available TV channels are taken over with various manifestations of the programme – you get the show itself, you get (on a different channel) a behind-the-scenes show while the cash is counted, you return to the original channel for the final verdict and for the aftermath in which the blubbering ‘winner’, one Alexandra who has most effectively demolished Leonard Cohen’s ‘Hallelujah’, delivers such euphoric statements as ‘I’m not real!’ and ‘My bone thanks you!’ The world (or the UK, at least), breathes out. A truly left-field consequence is that Leonard Cohen, who came out of retirement this year at the age of 75 as he’d run out of money, not only now tops the UK charts with this tune – Alexandra is at #1 and Jeff Buckley’s version is at 2. This latter is organised by JB fans worldwide as a revenge on ‘ Big Corporations’.

Having cleverly scheduled the warm-up gig on the day following the gig which it was intended to warm up for, if you see what I mean, we all drove down to Southampton on the Sunday.

Last night there were about a thousand rabid fans who seemed to know most, if not all, of the words. One fan told Andy’s daughter that if he had missed ‘No Russians’ due to his late arrival, he would have thrown himself off a high building. Such senseless self-sacrifice was not necessary, in the event, thanks to the the ever-reliable and fragrant London public transport.

The citizens of leafy, sleepy Southampton made it very clear. For Radio Stars, the war was over. There was no bar in the hotel. There was nowhere to get breakfast. There were no shops open anywhere, ever. There was no way to either get into the town or, having got in, to get out. This town was most certainly not big enough for any of them.

But what had happened to the transport in Southampton? Perhaps the audience had been transported to a far-off galaxy, or into another dimension. They certainly weren’t at the gig. But the attendees who did brave the Southampton night were of a different nature, having traveled from all parts of the UK for the occasion. As they were almost outnumbered by band members, the event became an intimate exchange of opinions and requests. Following a breakneck version of ‘Arthur’, an audient member noted that it could have been faster still, whereupon we tried it, and reached the end of the first chorus within about 10 seconds. We deployed the intimate Radio Stars sit-down version, with all band members occupying nice comfy chairs, we tried the elevated version with band members perched variously upon a step ladder, a chair and the drum kit. We debated the finer points of former Mormon-teaser Joyce McKinney, subject of the subsequent ‘Sex in Chains Blues’. Rather like Radio Stars, Joyce recently returned briefly to the public eye following her unsuccessful quest for a wooden leg for her horse.

We nominated our favourite terrorist and, having agreed upon the winner, detailed his exploits with ‘Terrible Mess’, now known as ‘Shoe Bomber’. All in all, it was one of the best shows that we’ve ever done, following a straw poll among band members. Then Steve Budney and Martin left for the Fatherland for drum recordings.