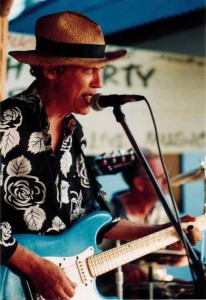 Adrian responded in 1997 to Finnish fan Petteri Aro, who sent him a pile of questions by post:

Sorry for the delay but have been away for a while. A long and unwanted journey. I was very amused on a lot of Martin’s stuff i.e. the ramblings of good old Dink on the phone, and if you want to send a copy to MG, it’s OK.

Q Did Island Records send you to the Sparks audition, or was it by chance that you turned up?

No, by chance, my brother made me go.

Q What do you remember from your first meeting with Sparks?

Ron looking a lot like Frank Zappa and playing r’n’b.

Q What do you recall from the audition?

I don’t really remember except the atmosphere was cold, and everybody seemed edgy.

Q How were the personal relationships at that time?

Yeah, not good. OK. I thought Ron and Russ were real prats and still do, Martin was always well turned out and for a while took it seriously (soon wore off). Didn’t pay much attention to Dink, just made a lot of bang and clash noises.

Q Did you make musical contributions?

Yeah but went unnoticed, and, as with Martin, not wanted. Lost interest. I just wanted to butch it all up and get a blues lick in everything. Only MG, I think, was the only one who had a clue what I was up to.

Q Were your musical ideas accepted?

Not much but it was not for lack of trying, just unwanted.

Q What was Muff Winwood’s input?

Muff had a lot to do with it, but a very droll guy.

Q What about photo sessions?

Fucking hated them, missing them when I didn’t feel like it. They had at least 10 photos – fuck them, dressing me and trying to get me to ponce about.

Q What do you remember about the video shoot for This Town?

Bloody cold, but nice house. Got very pissed on wine. Diving into a pool, froze my thing off, confused at being filmed naked in the sauna. Real fucking art, yeah?

I think he was taking more dope than me, or just very hyper.

Q The firing of Martin and Peter?

Didn’t miss P.O. but shocked about Martin, but he was a threat to R + R – much better image than they had foreseen, before they knew it. Pissed me off. Speaking to Hewlett and saying “You do it to me that way, I will kill one of them, when the time comes you fire me in person! Felt for M.G.

Would you have wanted to continue working with any of the other musicians?

Only Martin, (but we) didn’t do much together. But I liked M.G.

Q Any memories of the gigs?

Long coach rides, silly sound checks and getting wound up a lot. It gave (me) great pleasure over-playing live, really pissed off R + R and just like Kimono Part 2

Q And then you were fired…

I planned my demise, just pissed every body off. If I walked, I would have broken my contract, had to make them break their side of it. John came to my house and said, “Well, you’re expecting this, want your lawyer to look over these?” (papers). We had a laugh and a drink.

Q Did you see any of them again?

I think I saw Martin a couple of times (but not sure). Dink one time, some hotel somewhere – very fuzzy about that one.

Q What did you do next?

That’s quite a long one. Started playing a lot of blues, then Hewlett had some bird-brain idea – me, Ian and Trev and a guy called ‘Chuck Wagon’ went off to record in New York. Never knew his real name (Malcolm Mortimer) till I got your stuff. It was called the 4 Squares (there were five of us). Many good times with Trev and Ian. Always loved Trev. Recorded some stuff, but it got wrapped up early. ‘Chuck’ took his head off with a shotgun in L.A. 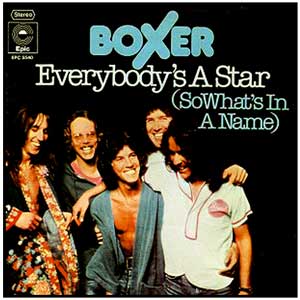 Q Any memories of the Kimono and Propaganda line-ups?

OK, with the first line-up not much fun, very little time to get to know each other, pity. Remember being bored shitless. Martin read papers, I was astral travelling. Studio – anything I played (that I thought) was any good ended up on the floor in my absence.

I remember Air Studios; one night we had finished a track, Muff and R & R were tracking in the control room as we still had time to run on. Trev, Ian, Dink and me went into some blues stuff, always a good way to get to R & R. Muff, it transpires, wanted to push them too fast for an incomplete song – Russ had a sobbing wobbly and rushed out and slammed the door behind him. He ran into a soundproof store room and, despite his panic and screams, could not get the door open from the inside. I, and I think Ian, saw where he went – he, like me, was pissing his pants and laughing so much we could not talk to tell Trev and Dink. They could not find Russ anywhere. he’d had been gone a long time – maybe 1 hour and a half. I think it was Muff or Hewlett who twigged that we knew where he was. Still cracking up, we told them. Got him out, boy – was he in a state. We got a secret smile from Hewlett and a smirk from Muff. We just said it was a lucky guess.

One more Ian reminded me of. We were in Paris for a TV show, Trev, Ian and me after getting severely pissed in the George IV (very flash place) went to get some night club life. We found this very flash sleazy club but we didn’t realise how expensive it was, and had to make good our escape fro this outrageous bill. We just made it out and lost the pursuing bouncer some way up the street. More drinks, some place. It’s about 5 AM and we got arrested for being drunk and singing – “You are my sunshine” at the top of our voices. Trev and me could not talk (too fucking pissed), Ian could (just) and told the police where we were staying, so they told us to “Shut it!” and get in side (we were nearly at the hotel) went to one of our rooms and demolished the fridge contents and passed out. Oh fuck. Oh yes, we will always have Paris.

Sorry for the state of my scribe, but it’s not easy in a hammock. Hope that’s enough, Petteri. Regards to MG if you get to him before me. Take care.

A fan’s recollections of meeting and playing with Adrian at around the same time as this interview, in Thailand.