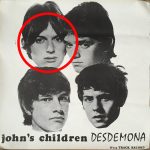 John Hewlett, for it is he

‘While some other Sparks nuts would argue this point passionately, I tend to agree these days with the general consensus that ‘Kimono My House’ from 1974 was Sparks’ finest hour. ‘A Woofer In Tweeter’s Clothing’ (1973) and ‘Music That You Can Dance To’ (1986) come close but that’s beside the point. There was a certain something about ‘Kimono’.

It was their third album. The first two were recorded in America and flopped so Ron and Russell Mael (who are Sparks) ditched Harley Feinstein and sundry Mankeys and started anew in England, where they got a manager (John Hewlett) and three English musicians: Martin Gordon on bass, Dinky Diamond on drums and Adrian Fisher on guitar. Ron Mael wrote ‘Kimono My House’ during this period (with a little help from Russell) and the album was a huge hit as soon as it was released, both critically and commercially. Equally quickly Sparks disappeared from view. Martin Gordon and Adrian Fisher were soon replaced at the Maels’ request, the hits stopped abruptly and by late 1975 Sparks were practically forgotten in England.

They have subsequently released an indecent amount of classic albums as a duo and they have had ‘hits’ all over the world but they have never re-captured the brief hysteria elicited by ‘Kimono My House’ in 1974.

To find out what went wrong, I conducted an interview with John Hewlett. John is best known for being a member of and main songwriter and inspiration for the name of John’s Children, but he has managed a number of successful groups since then, and was manager of Sparks from 1973 to 1978. The following extract of the interview examines what went wrong with Sparks’ plans for world domination during this period.

SAUSADE: There was a major change in Sparks’ sound for ‘Kimono My House’. How did that come about?

JOHN HEWLETT: Well, It was about a year before ‘Kimono My House’ was released that they came over and they lived with me at my house in London for that year. We developed the thing in that time – advertised for musicians and rehearsed.

S: I get the impression that Kimono is your favourite Sparks album, is it just the songwriting you like most?

JH: It’s not just the songwriting, it’s everything: Russell’s voice, the production, Ron’s songs, it was all ‘right’. It was a classic album, but it went downhill from then… I mean, I love some of the later stuff, like ‘Something For The Girl With Everything’, that’s a great song, but it was never the same as with the ‘Kimono’ band. That was a great band and I really believe that if that line-up had stayed they would have been bigger than Roxy Music. All the group members were as strong as Ron & Russell, and I think if they’d stayed together there’s no question that they’d be millionaires. To be honest, if they reformed, they’d be huge…

S: Did they have a feeling at the time of how big they were going to be?

JH: Oh yes, if you walked into a rehearsal room it was sensational, it really was, you’d just laugh.. it all fitted as a band. And that band never even made it to the first tour.

S: It’s been said that Martin Gordon was the “originator of Sparks’ sound”…

JH: I don’t think he was, but he picked up a Rickenbacker guitar and he was one of the first people to use it like that. Unfortunately he was the first casualty and the first mistake. Ron and Russell were very intimidated by him because he was a showman as much as they were. But they got the rest of the band behind them and I blame myself partly for his getting fired; as manager I should have stepped in and told them what they’d got going for them, but I was immature at the time and when the band said he should go I let him go.

S: I’d always got the impression he left of his own accord…

JH: No, he was fired and he was terribly upset. That was the point it all started to go wrong.

S:The next major change of sound was for the Big Beat album (1976). Why did they go for that harder, rock sound?

JH: I wouldn’t call it rock, it was a contrived attempt by [producer] Rupert Holmes to… well, it was ‘Rupert’s a big name’, it was swanning around New York… I think the best comparison is Bob Ezrin and Alive Cooper, but with Sparks it was just a bunch of session musicians in New York.

JH: And that was a horrible album.

S: Well… it was better than Big Beat.

JH: Oh yes…. but on that album [the Maels] were thinking they could do anything. It’s like their song ‘Falling In Love With Myself Again’, they really were. I mean if you look at those two album covers, you can see it was all wrong.

S: I’d always assumed the cover of ‘Introducing Sparks’ was a joke…

JH: I suppose it was meant to be a parody of the fifties style of airbrushed photo, but this was our first release on a really big label, and I’d worked hard for that deal [with CBS] and it was all going wrong.

S: Did you try to tell them it was wrong?

JH: Yes, I think it was in Munich in 1978. We were in a hotel and Ronnie broke down and cried and said I didn’t care any more, that I didn’t care for his music, which of course I did.

S: Whose idea was it to move into electronic music?

JH: Well, I wanted them to move into that direction and we compromised by deciding to use Giorgio Moroder. So I chased Moroder around the world, and then Moroder called them independently and said there was a guy he knew, some big name manager…

S: So they thought if they went with him, they’d get their big break?

JH: Yes, which shows, I suppose, another of their follies. They were all sheepish and quiet when they told me. I said ‘that’s an extremely unpleasant thing to have done’ and I walked out and went to a lawyer. But I did like some of the songs they recorded with Moroder, some of them have got that raw sound, which is good.

S: So Moroder was heavily involved, not just on the musical side?

JH: He’s a very clever guy. He writes these sort of two-finger melodies and I suppose in that respect he’s the equivalent of Stock, Aitken and Waterman. But I think after a while he realised they weren’t going to make it on a huge scale, and he’s a very greedy man. He cut me out, and Ron and Russell fell prey to it, he cut their royalties heavily.

S: When was the last time you met up with Ron and Russell?

JH: I went to Los Angeles two years ago and I phoned Joseph [Fleury, founder of Sparks fan club and at that time their manager] and he wouldn’t see me; he wouldn’t even have breakfast with me, he wouldn’t return my calls…

JH: Joseph must resent me, you know. He probably harbours ill-feeling, I don’t know why…

S: Would Ron and Russell have wanted to see you?

JH: Russell probably would… as for Ronnie, I don’t know. Maybe they harbour ill-feelings too! [laughs]’.