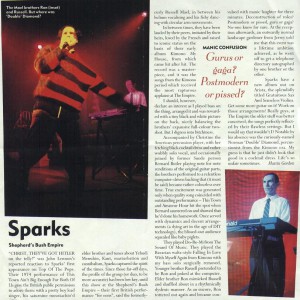 ‘Christ, they’ve got Hitler on the telly!’ was John Lennon’s reported reaction to Sparks’ first appearance on Top Of The Pops. Their 1974 performance of ‘This Town Ain’t Big Enough For Both Of Us’ gave the British public permission to adore them: with a pretty boy lead singer, his saturnine moustachioed elder brother and tunes about Yehudi Menhuin, masturbation, Kant and cannibalism, Sparks captured the spirit of the times. Since those far-off days, the profile of the group (or duo, to be more accurate) has been low key – this show at the Shepherd’s Bush Empire was their first British show ‘for eons’, said formerly curly Russell Mael in between his helium vocalising and his fishy dancing with circular arm movements.

In between times, they have been lauded by their peers, imitated by their heirs, loved by the French and raised to iconic status on the basis of their early album ‘Kimono My House’, from which came hit after hit. The record was a masterpiece, and it was the songs from the Kimono period which received the most rapturous applause at the Empire. I should, however, declare an interest as I played bass on the thing, arranged it and was rewarded with a tiny black and white picture on the back, nicely balancing the brothers’ expansive full-colour two-shot. But I digress into bitchiness.

Accompanied by Christine the American percussion player, with her fetching black cocktail dress and rather wobbly solo vocal, and occasionally joined by former Suede person Bernard Butler playing note for note renditions of the original guitar parts, the brothers performed to a relentless computer-driven backing that (it must be said) became rather colourless over time. True excitement was generated only when quality song coincided with outstanding performance – This Town and Amateur Hour hit the spot when Bernard sauntered on and showed that he’d done his homework. Once served with dynamics and decent arrangements {a black art in the age of DIY technology), the blissed-out audience squealed like baby piglets.

They played Do-Re-Mi from The Sound of Music, they played the Bavarian waltz-style Falling In Love With Myself Again from Kimono with my micro bass solo surgically removed. Younger brother Russell pretended to be Ron and poked at the computer. Elder brother Ron mimicked Russell and shuffled about in a rhythmically dyslexic manner. As an encore, Ron tottered out again and became convulsed with manic laughter for three minutes. Deconstruction of roles? Post-modern or pissed, gurus or gaga? No-one knew for sure. At the reception afterwards, an outwardly-normal landscape gardener from Jersey told me this event was a lifetime ambition achieved, as he went off to get a telephone directory autographed by one brother or the other.

Sparks have a new album out on Arista, the splendidly titled Gratuitous Sax And Senseless Violins. Get some more guitar on it! Work on those arrangements! Really, guys, at The Empire the older stuff was better conceived, the songs perfectly reflected by their flawless settings. But I would say that, wouldn’t I. Notable by his absence was the curiously-named Norman ‘Double’ Diamond, percussionist from the Kimono era. My guess is that he just didn’t look that good in a cocktail dress. Life’s so unfair sometimes.