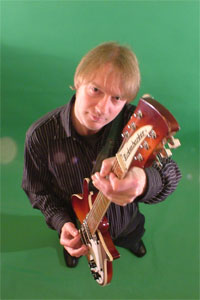 The recording of Time Gentlemen Please took place between September 2008 and February 2009. Guitars and bass were recorded at Radiant Future Studios, Berlin, brass and drums at All Around Music, Berlin and vocals at Elektrik Lundyland, Stockholm and Radiant Future. During the boat sessions, we were visited by the source of inspiration for one of the tunes being worked on; this was ‘Passionate About Your Elevator’, derived from the slogan for a well-known lift company’s proposed advertising campaign. It is not yet known whether the howls of derisive laughter have persuaded Bruce to forgo his creation, but this song certainly will add weight to the campaign if not. Now’s the time to meet the unsung heroes of the back cabin. 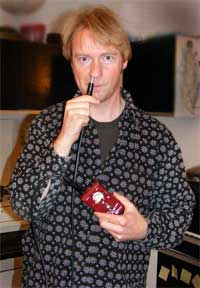 Of course, as any self-respecting rock-musician does, he first makes sure that his nose is properly connected, otherwise it won’t work, or it might feed back. However, no animals were (significantly) hurt during the recording of Part V. At least none that we recall.

Ralf plays in a number of Berlin bands, including the Heartbeat Five and his own band the Smash. 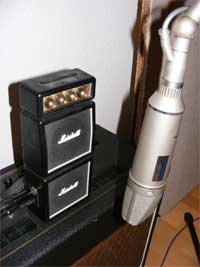 One of the secrets of the indefinable Leeman-sound (or das Klang-Leeman, as the locals might say) is his use of the smallest possible equipment. Well, that’s what his girlfriend says, at any rate.

Here we see the world’s smallest Marshall stack. paired up, coincidentally, with the world’s largest Neumann U-87. We are saying nothing more on the topic. 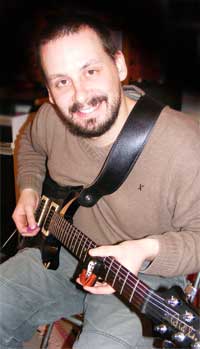 Radio Stars’ guitarist Ian Macleod turned up at a recent Radio Stars gig without a plectrum. Following his fearless lead, Enrico Antico decided to leave his bottleneck at home. Fortunately, Leonid Brehznev is available as a substitute. A celebratory meal follows, marking the triumphant return of the formerly-discredited discredited Soviet hero. (Not Enrico, he’s actually half Italian. The bottom half is German, however). 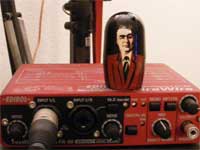 Heeeeeere’s LEONID! You can hear the results on ‘You Can’t See Me’ on the new release. 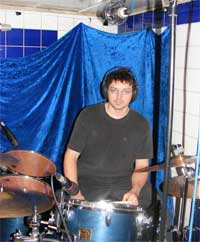 Steve Budney heroically drums in a boat. Purveyor of a particularly strict form of math-prog, he concentrates on the death-defying metre changes of ‘I Have a Chav’. His expression perhaps says it all. It’s a wonderful life on the ocean brain wave. 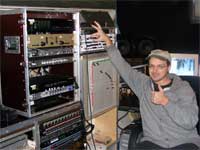 Steve finds THAT knob which all musicians twiddle when photographed. Fortunately it also exists in Germany, and especially in German boats. And so it is twiddled. Look you can even sit and twiddle at the same time, now that’s what I call independence of limbs. Steve rightly prides himself upon his knob-twiddling ability.

This is a Stagg, and it also appears on Part V. Where are it’s antlers, you might reasonably ask, and it’s a good question. It also has no frets. IT GOT NO FRETS? It fell off the back of a lorry, matey, let’s take it back.