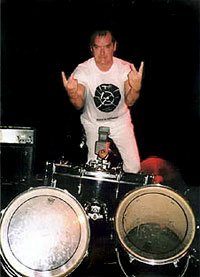 Drummer with provocative “sonic terrorist” band John’s Children, who also played with The Who and Jimi Hendrix

“A ghastly racket” was how Townson later referred to John’s Children, but they made their mark thanks to their outrageous stage performances which involved chains, fake blood and feathers. Their provocative recordings — their single Desdemona was banned in 1967 by the BBC for its risqué lyric — and their ambiguous image, often being photographed naked with their fundamental parts covered by garlands of flowers, also contributed to the band’s status. Their manager at that time, Simon Napier-Bell, honing his skills for his later protégés Wham and George Michael, procured them a support slot on The Who’s 1967 German tour, but they were ejected mid-tour for being “too loud and violent”, in Townshend’s words (presumably he was being ironic). He nonetheless requested Townson as a replacement for Keith Moon on a UK tour later that year when Moon proved “unavailable”. Signed to Who manager Kit Lambert’s label Track Records, Townson had inevitable encounters with label-mate Jimi Hendrix, with whom he performed at the notorious London rock hangout the Speakeasy.

Following the departure of Marc Bolan to calmer pastures in 1968, John’s Children called it a day. Townson’s aggressive drumming led him to join faux-skinhead band Jook in 1972; they were demobilised in 1974 when half of them were seconded to oddball Californian teen-combo Sparks. Townson joined forces with Martin Gordon in the glam super-group Jet, which featured a variety of rock luminaries of the day.

Townson subsequently turned his back on his music career for domestic reasons He concentrated on art, building up a successful career as an illustrator. He worked on a variety of album covers, books, watercolours and leading label greetings cards still to be found on every high street. When later health issues prompted another change of career, he returned to study and entered the world of social work.

He qualified as a social worker and was, at the end of his life, managing the Phoenix Project in Hatfield, which provided a service to young people making the transition from care to independence. Having been taken into care at the age of four when abandoned by his parents, he had an innate understanding of their circumstances. At an early age he was identified by the local Battersea Social Authority as a “promising proletarian”, in the vernacular of the time, which he often quoted. Successfully passing an aptitude test, he was selected to be a residential pupil at the Stoatley Rough School in Haslemere. Townson later identified the insight of the (un-named) social worker who saw through his early behavioural difficulties as the opportunity which facilitated his escape from his surroundings and circumstances. His early experiences enabled him to provide the empathy and understanding to which those with whom he dealt responded with love and affection.

He returned to drumming for pleasure in the 1990s — a reformed John’s Children performed in the US and Europe and Townson would make an annual trip to Berlin to perform on former bandmate Gordon’s albums.

Townson is survived by his second wife, Marilyn, and their five children.