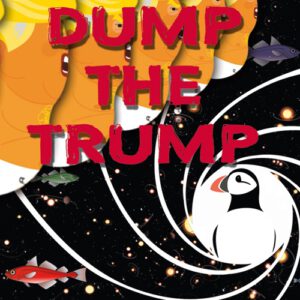 Hail Blimp! Created in honour of the visit of the Orange Pussy Grabber in this year of our Lord 2018, whereupon He doth grace the shores of Ye Olde England with his gracious bulk and a hand-picked selection of teeny tantrums.

And whereupon we were most humbly moved to update the earlier version with selected quotations coming out of the Great Man’s brain (but not his organ). Lord forgive him for he hath not got one. He probably means organ but on the evidence, it is unclear.

And lo we are in somewhat turmoil and sore afraid of miniature unseemliness and do humbly prostrate ourselves at the tiny feet of traitorous orange greatness. Who would think. Who would think?

This is a remix, with some previously unused bits, some extra vocals and a bit of a general fiddle about. It vibrates at a wavelength of between roughly 585 and 620 nanometers per second. Know what I mean? Mine’s a teeny tiny small one, but you do not wish to know that either.

More at the fish shop. And visit the Blimp on Faceblimp. Anyway, goodblimp.