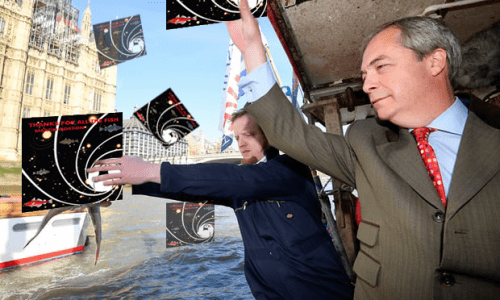 And don’t come back!

Nigel Farage and Derek Turbot, both on day release from Bedlam, spent an enjoyable day in March 2018 throwing used copies of Thanks For All the Fish into the River Thames, in an effort to finally get the Government to realise just how appalling foreigners (and fish) really are.

“Please stop all this fishy nonsense at once!” they manfully shouted into a howling gale, to the consternation and attention of absolutely nobody at all. Jacob Rees-Fish sent his apologies from the shore, where he was unavoidably detained by Russian investors quizzing him about time-travel and NHS reading glasses, and whether the 1950s were as actually bad as they were made out to be by alarmist left-wingers..