“Firstly, just a little politics. The 1976 American Presidential race featured the first televised debates since JFK had gone head to head with Richard ‘I’m not a Crook’ Nixon in 1960. Nixon’s successor after impeachment was Gerald Ford and during the second of his three clashes with Jimmy Carter, the incumbent President made the bizarre and blatantly untrue claim: ‘There is no Soviet domination of Eastern Europe, and there never will be under a Ford administration.’ He then refused to retract the statement.

Satirical mag Private Eye immediately pounced on the gaffe and lampooned Ford on its front cover. Martin Gordon was an avid Private Eye reader and a song was born.

Eventually released in August, 1977 (by which point Senator Jimmy Carter had been inaugurated as President), No Russians in Russia from the Stop It E.P. was the second 45 by Radio Stars.

Martin Gordon wrote and produced the song and also supplied bass, keyboards and backing vocals and he has agreed to answer some questions on the song, his time as a Radio Star, and his career generally”.

You were in Sparks during the Kimono My House era but that ended acrimoniously. I’m guessing you haven’t been to see them on their current tour?

You guess correctly. In fact I’ve been subject, once again, to the whims of my hairdresser, and I couldn’t let him down by just trolling off to see Sparks at a moment’s notice. The last time I met up with Reginald and Roginald it all ended in tears anyway – here’s my account of what they were up to on that occasion, as published by Mojo mag. But I wish them luck and feel most proud to be co-financing their ongoing activities, albeit inadvertently. Here’s an overview of that long-lost era, from a recent Spanish article.

After Sparks you joined Jet, who were called the first ‘glam rock supergroup’. I’d have put money on you making it big but somehow that didn’t happen. Any ideas why?

Well, I had only just started writing, so some of the tunes could probably have been improved. And the rather unpredictable nature of some of the musicians involved did not make a solid foundation for even a successful rehearsal, let alone a meteoric rise to stardom. We were actually just beginning to make some headway when we were dropped by the label for refusing to play waltzes. We performed all our new material for a party of CBS bigwigs; we’d strung all the tunes together as one continuous piece of music, as a lighthearted jest. Well, they didn’t find it at all amusing and gave us our cards. ‘Dirty Pictures’, later to be the first Radio Stars single, came out of that collection of material, so what did CBS know about anything?

Did you see Jet as Glam Rock or do you not bother with categories?

Categories are forced upon us, unfortunately. Pre-digested bite-sized chunks of information relieve the average punter of the onerous task of having to work it out for him- or herself. If I had to do just that, I would classify Jet as Music-Hall Rock, if anything. ‘Our Boys’, for example, certainly fits into this category.

Yeah, there definitely is that element in Our Boys, and songs like Fax ’n’ Info and Tax Loss too. I would see it more as Post-Glam if anything myself.

I think there are two glam-categories – builder-glam and art-glam. The Sweet, Mott the Hoople, the Glitter Band would all fit into the first, Roxy Music, Bowie and their ilk into the second. I leave it to those who are more removed from the issue to decide which category has a Jet-shaped hole.

No Russians in Russia was originally demoed in 1976 in between Jet and Radio Stars. Were you aware of punk at this point? Quite a few bands independently of punk were moving in the direction of shorter and sharper songs around this time.

You are right, this tune was recorded initially before the explosion of punk. And as you note, things were becoming more focussed and to the point, at least in my neck of the woods. I was always a big fan of economy, musically speaking if not fiscally. We were aware of the emerging punk thing, but didn’t consider that we would be seen as part of it. Our association with punk was really as a result of being on an independent label, Chiswick Records, but of course it was hard not to wear a leather jacket and have short hair in London, at that point. However, one band member grimly held out, at least hair-wise.

Did you come up with the music or lyrics of No Russians In Russia first?

The words came first inspired by the Private Eye cover, and the tune wrote itself once the lyrics were in place. I recorded it once as a demo, then again for the Stop It E.P. and then a third time for the Holiday Album, as I thought it sounded a bit tinny on the E.P. There’s a nice live version on Hello Boston, which was my solo debut in that city in 2007.

You performed the song on Marc Bolan’s late afternoon TV pop show Marc. How did that go?

It was very cool, and very nice to finally meet the bleating kobold in the flesh. Once we had finished ‘No Russians’, we had some photos taken. Marc tragically crashed into that tree about two weeks later. 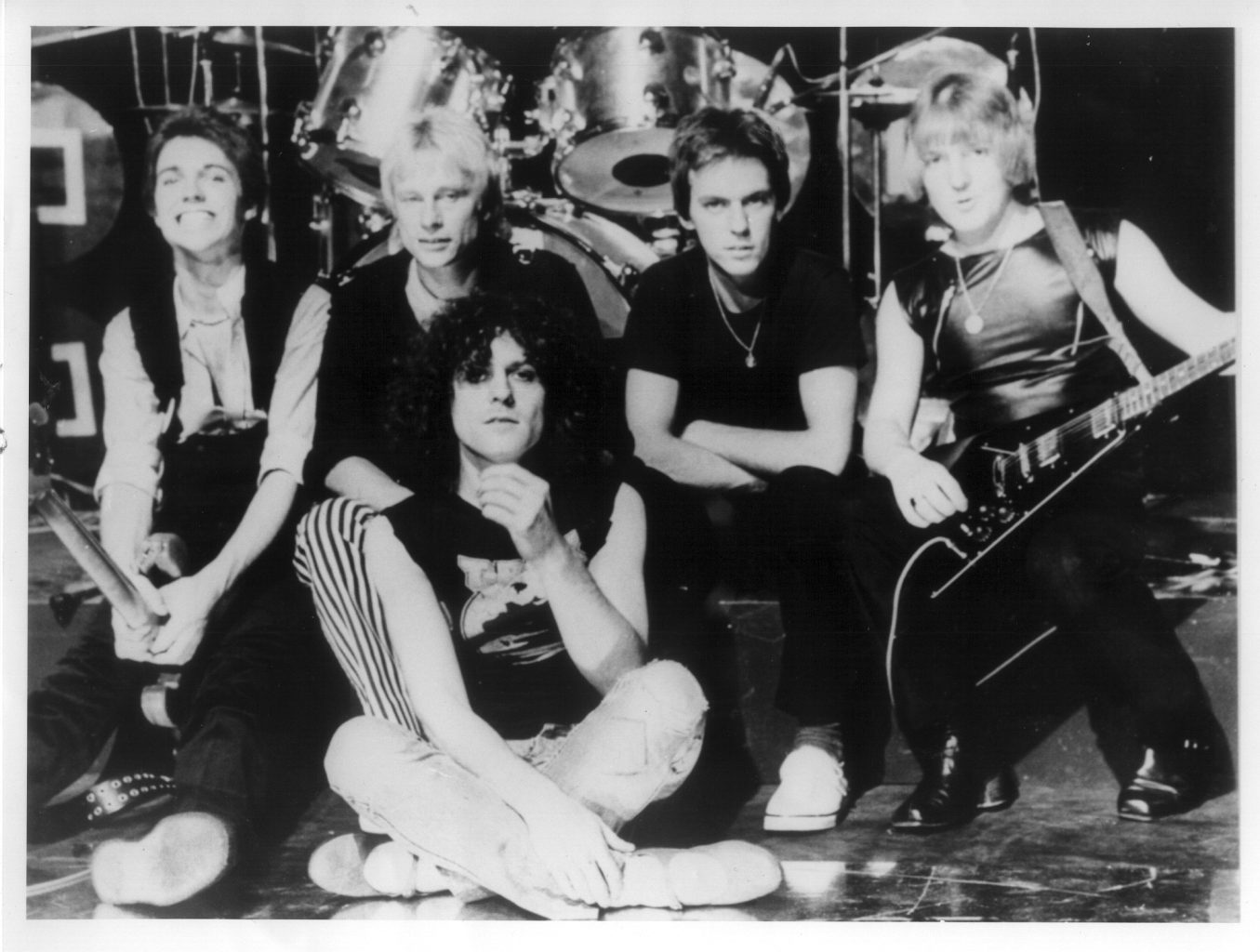 Any memories of playing the Glasgow Apollo with Eddie and The Hot Rods and Squeeze in 1978?

The Apollo was always a great gig for us as the audience, if they liked you, made it known. They also made it known if they didn’t like you, as we found out earlier in Jet when we played there with Hunter-Ronson. I recall that when we did the Hot Rods soundcheck, the stage was quite close to the floor, but it was raised by the time the gig came about. This we didn’t know. So when Andy leapt of the front of the stage, he expected to hit solid ground within a couple of seconds, but he was now about three metres in the air. Plus, to make things even more secure for the sensitive artistes, the stairs at each side of the stage had been covered over with sheets of polished metal, making it impossible for him to climb back up. I think we used to just keep going until we saw him again, and then we’d end whichever tune we were hammering into the ground.

Andy Ellison apparently suffered an amazing amount of injuries on that tour. He stepped over my shoulder in the Apollo stalls when he decided that some crowd interaction would be a good idea. Did you ever worry when he got up to some of his daredevil antics?

Well, we always figured he would show up again at some point. At the Colston Hall in Bristol, he jumped on the back of one of the security guards, who took off round the hall in an effort to get him off his back, and once I remember that somehow he once got locked out of a venue and couldn’t get back in. He could hear us from the street, he said, while he was pondering his options. As you know, it was sometimes the punters who came off worst – one poor bloke got smashed across the face with Andy’s light sword, when he was going through his Darth Vader phase. The very next day, we took out insurance.

Over the years Radio Stars have got back together on occasion. Do you envisage this happening again any time soon?

Yes, we did it in 2008 and again in 2010. I’m thinking about having some kind of musical birthday celebration next May. If the stars are in alignment with Uranus, it might turn out to be a Radio Stars gig…

And how’s the solo career going?

I’ve just completed the sixth part of the Mammal Trilogy and am having a bit of a lie-down. There are a few projects on the back-burner, but probably nothing will be released for at least another year. I did recently collect all my words in a book, along with stories about each of the tunes, and I was quite pleased with how it came out. It’s called ‘Words in Your Shell-Like’, and it wraps up the whole event quite nicely. ‘No Russians’ is included in the 150-odd tunes, of course.

And finally, you’ve worked as a session musician and played live with everyone from The Rolling Stones to Kylie Minogue, wrote for S’Express and helped remix Primal Scream. To pick just one more highlight from your CV how was playing live with Blur?

The Blur episode came about when I was going through my all-things-to-all-men period. I played keyboards with them at the Kentish Town Forum. There were a few tunes in the set on which I didn’t play, so I wandered into the pub next door and monitored the band’s progress through the adjoining wall, and reappeared at a suitable moment. It later turned out that Alex the bass player was a ‘Kimono My House’ fan, and was rather put out that I hadn’t told him that I was actually a moonlighting bassist.