From One Album Wonders 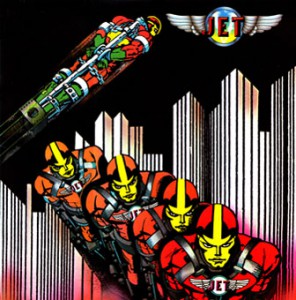 Jet is a brilliant name for a band which I suppose it’s been used by at least 31 different musical acts. The best in the fleet was the British band of the 1970s. That Jet was co-piloted by Andy Ellison and Chris Townson (formerly of another one album wonder, John’s Children, and before that, The Silence), David O’List (formerly of The Attack, The Nice, The Misunderstood, and Roxy Music), Martin Gordon, Peter Oxendale, and Trevor White (who’d played in the power-pop band, The Jook, with Townson as well).

O’List had played with The Attack, The Nice, The Misunderstood, and Roxy Music and White had played, alongside Townson, in the obscure power pop band, The Jook. That Jet were so tuneful is a bit surprising given the fact that Ellison and Townson had previously played in John’s Children, a one album wonder for whom songwriting seemed to be among the least of the band’s concerns.

Jet released just one eponymous album on CBS in 1975 (released on compact disc in 2002 by Radiant Future). Though a bit late to the scene, it was a pleasing collection of Glam Rock which decidedly owes a bit of a stylistic debt to Sparks, with whom Gordon and Oxendale had also briefly performed. After Jet’s final flight, Ellison, Gordon, and White went on to play in the New Wave band, Radio Stars, Oxendale went on to form the studio production unit West End, and Townson died in 2008.