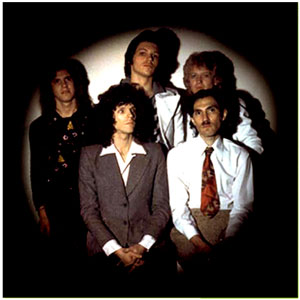 I was prompted to dig out an ancient notebook to see if there were any ‘Kimono My House’ out-takes. Well, guess what. Here are my recording notes from the time:

There were heated discussions over arrangements. For example, the tune ‘Complaints’. I proposed an outro section, which was rehearsed and recorded to cassette. The following day, after it had been Mole-digested overnight, there was a reversal of position. My outro, to which I had become unfortunately attached – always a mistake – was deemed to ‘overshadow the rest of the song’. My work ethic at the time was, and indeed still is, to make the weak bits better, rather than chop the good bits out, but this solution was not realised and the outro was chopped.

The song ‘This Town‘ had a bunch of chords but no actual parts. I came up with a line, Adrian doubled it, kind of, and it worked. “I didn’t actually hear those chords as a riff”, said Ron after rehearsals. Middle 8? Certainly, sir. I threw some chords in for a brief syncopated instrumental interlude. IPR? Don’t even go there. This was 1973, after all. ‘In My Family‘ seemed to be stuck in its US-band mould and, no matter how hard I tried, it was not possible to prise it loose. The bass playing on ‘In My Family’ was described as ‘really wimpy’ by the head Mael, an adjective which I initially presumed was ironic, given the nature of the underlying composition. There was no retake. Listeners can judge for themselves, no doubt. ‘Equator‘ seemed to go on a bit, but there was always a newspaper handy.

There were confrontations about mixes. The proles – i.e. those of us who actually played the music – were discouraged from attending the mixing process, although i ignored this heavy hint and attended all except one session. There were various surprises in store upon hearing rough mixes from that one session. On ‘Falling in Love’, for example, there’s a break where the guitar is clearly too quiet. My remark about this did not go down well.

The ongoing issue was about how much time to spend getting a decent bass sound, about which I naturally had certain opinions. I suppose it depended upon whether you were attached to the notion of a good bass sound. I was, very. Here, in response to regular queries, is how the bass was recorded.

I had the sound figured out before I joined the band but I was playing a Fender Mustang, given the unattainable price of a 4001 in those days, and even more so in these, actually. But once unlimited budgets were in the air (ha! the innocence of youth), I finally got hold of a 4001. Round-wound Rotosounds, one gauge thinner than the standard, a plectrum and an H&H amp. This was a transistor amp, which I turned up very loud to get some distortion. It was miked and DI’d, but the mic was where the sound came from. There was some compression in the control room, but not much. The H&H in fact had a ‘sustain’ switch, which probably did the job. I always used to find that the closer I was to the amp and cabinet, the more responsive the bass felt, so that was what I used to do. The mystery of where my amp went – along with my royalties, it also ‘mysteriously disappeared’ – was recently revealed by Hungarians.

The studio engineers (Richard Digby Smith and Tony Platt) were probably rather bemused that a bass player would be so finicky about his sound, and possibly some of the band were as well, but they duly indulged me, and the bass on most of the recorded tunes sounded just fine to me.

My sonic requirements were sometimes achieved, as on the track ‘Barbecutie’, and sometimes not, as on ‘Amateur Hour’. On this latter tune, I was requested to replace the (to my ears well-recorded) amped bass by my D/I’d retake using a plonking old Fender Precision. Having to replace a well-performed part on sonic grounds was the ultimate indignity, given the sound which I was aiming for, and which I was generally achieving. The bass part itself was identical, although performed with perhaps less enthusiasm. (Actually, there is no ‘perhaps’ about it – I did it standing in the control room, and immediately went home as soon as it was done, without waiting for a playback).

The Precision belonged to a bass player who later replaced me. The gold disc for Kimono, awarded to each band member some weeks after my departure, mysteriously disappeared (“It might be in my loft, I’ll have a look”, said a bass-playing alumni, who promptly did nothing of the sort). However, a mere forty 40 years later, guess what? Armed only with a credit card, I was kindly allowed to purchase my own gold record. And they say that capitalists are hard-hearted bastards and that Beethoven was deaf. It’s a funny old world and no mistake.

Other than that, I think the rehearsal process, which was where the arguments  / discussions / whatever took place, was a positive process which improved the final result rather than detracted from it. In my recent ‘solo’ life, I have returned to the notion that those musicians who know what to do are best at knowing what they CAN do.

On the KMH album, I generally I tried to shoehorn in as much as I thought relevant/possible, which included extra-curricular poly-rhythmic stuff from the realms of prog rock and jazz fusion, much to the stylistic horror of some. Playing three chords in the space of four, for example – I offered these kind of musical tricks from other genres. In the event the result was a (kind of) synthesis. As we now know from Hegel, this can only be A Good Thing. But if only he had Told Us Earlier. Or if only We Had Known About It At The Time”.

18 thoughts on “Kimono My House Sessions”